Today was the start of the Carpathian MTB Epic, a three day stage race in Romania. I was under the illusion the 10km prologue would be a gentle introduction to the beautiful mountains surrounding the resort. I was in for a shock!

The day started pretty chilled breakfast and working out the jigsaw of putting the bike back together after, what already felt like, epic journey to get here.

After packing my camelbak in the heat of the Romanian afternoon I wasn’t entirely convinced carrying a bag was the best way forward, but it was too late to go back to bottle cages now. The music playing loudly and the chilled out vibe reminded me of the Trans Alp and as the sun shone I made my way out onto the course.

10km doesn’t sound like a very long way but it soon felt like it. The climbing was insane! I always knew it was going to be, it’s hard to practise for ‘mountains’ in Southern England but I kept pushing forward, knowing that it had to end eventually, didn’t it?

The ground was loose gravel and rocky and traction was proving tricky. The first descent was steep but manageable down a grassy bank, this brought you back into the area over two little jumps and then back out and up. 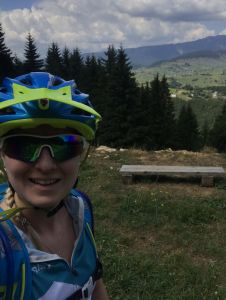 This final climb finished with two switch backs and then a short descent onto a gravel road which took me into the woods. I felt at home in the wood it was cooler and felt more like home riding the trail was loamy and I enjoyed making my way through the trees. Until, I got to the first ‘A’ line, when you see three downward pointing arrows you know its worth having a little peak before jumping in. I am glad I looked.

Nerves have always been a nemesis, I know everyone gets them, I seem to tie myself in knots quite easily pre-race and the knots had not released my brain yet so my feet hit the ground and there they stayed until I was at the bottom. Mind-set is something I find fascinating, how one way day it can just flow and on others not so. Whether your approaching a steep descent or your own ‘steep descent’ being able to think clearly enables you to react in the way you want to. Lets just say today there is a little fog in my brain and thinking clearly is hampered!

Anyway, back to the course after another fun section through the woods it was back to the climb a long an arduous single-track trail, the jumps and drop offs soon made me realise we were riding up a downhill track, the climb got so steep it was taking all my efforts just to keep the front wheel on the ground. I decided pushing may be more efficient and got off I am not sure if this was the case and what felt like a long time passed before the gradient eased out enough for me to remount. 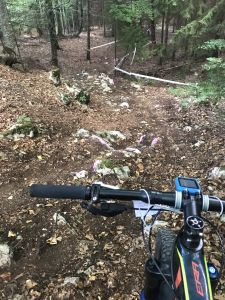 After the ‘hairy’ descent and brutal climb it was just a case of staying on two wheels back round into the arena. With a sign of relief to see the white arch and flags again after what had been a testing adventure.

After a shower and sitting down to write down my thoughts on today it was a mental and physical battle, but one that I did enjoy, I think. The Carpathian team fitted an extraordinary amount of gradient, obstacles and work into 10k it was packed full of surprises no kilometre was the same.

Tomorrow it gets a little more serious! 60km 2,700m of climbing… I feel tired just thinking about it.