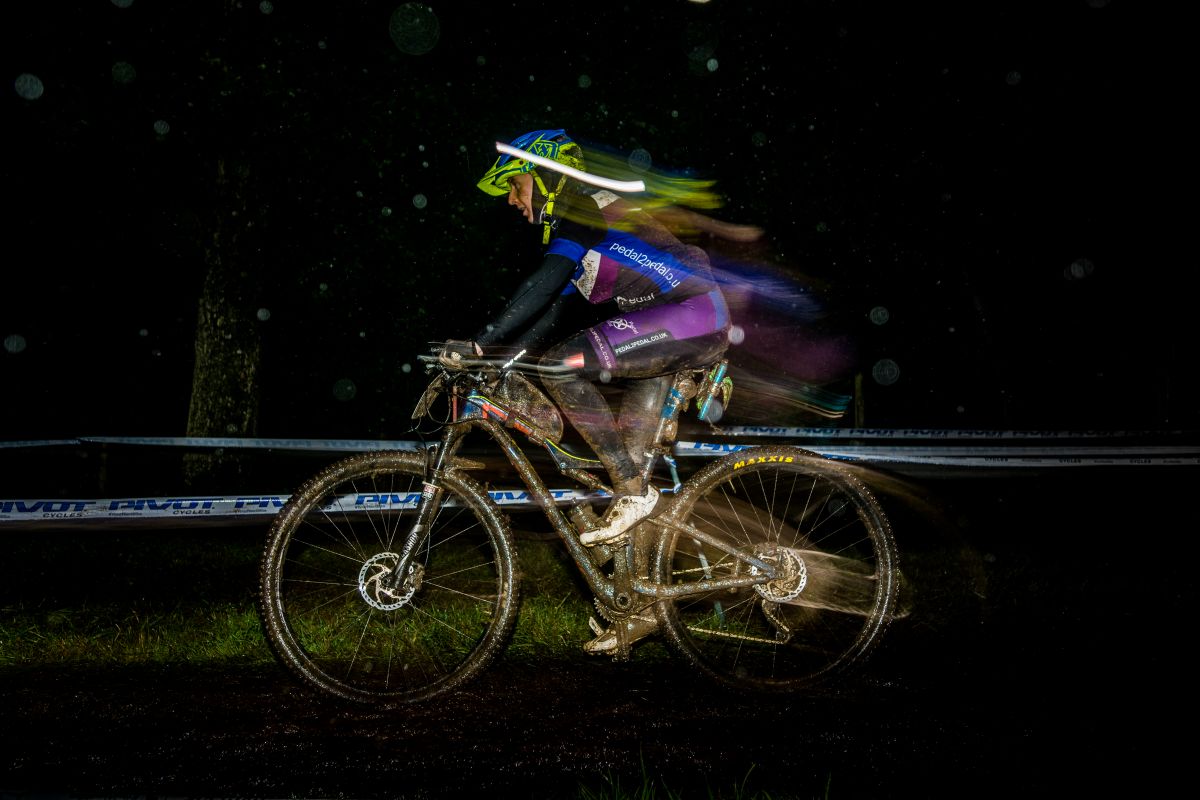 Mud bath. Just about covers the weather for my first ever 24 hour solo race. Pivot 24:12 is based at Newnham Park in Plymouth, an old mountain bike cross-country course I have ridden sections of it before and was excited to return.

A mixture of wet weather and a dog who likes to try and go through the side of the tent meant an early start Saturday morning to travel down to the venue.

We arrived into a wet campsite full of brightly coloured tents, loud music and plenty of bikes. The event had a real festival feel to it and a friendly atmosphere. We pitched the tent on the side of the course and I prepared my food and drink for the next 24 hours. I was going to try and stay on natural foods and had plenty of dates, salted peanuts, malt loaf, bananas and cheese scones. I also had Cliff shot bloks and SIS energy gels. Hydration wise I had Dirolyte which is a great as it doesn’t taste of anything but replaces all your electrolytes. 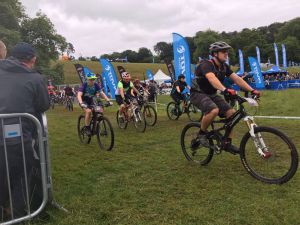 My plan for the race was to ride for 7 hours until 7pm then have a hot food break and then continue to 1am when I would have a little sleep before continuing again around 4am. As this was my first 24 hour race my goal was to survive and ride for over 15 hours. Knowing my body I knew I needed to have some sleep in order to keep going until mid-day on Sunday. So I would break up two riding stints with a nap.

Plan in place, number board attached and food in my pocket I headed to the start line.

A key area I need to work on is getting to these mass starts earlier! I was way down the field which meant as soon as the race started I had to work hard to get through the crowds of riders, some in sumo suit fancy dress, this wasted valuable time. I didn’t let it worry me though I kept checking my heart rate and reminding myself to pace it, after all this was a marathon not a sprint. 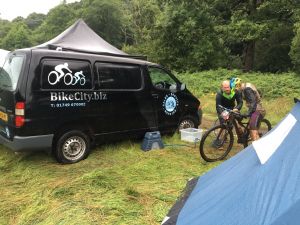 The course was a 14km loop which consisted of one main gravel hill climb (The Cliff Climb), lots of fast twisty singletrack through woods, a bomb hole run, a river crossing and a grassy descent. If it had been dry this would have been a really fast course, the rain however had other ideas. As the laps added up so did the amount of mud you had to push yourself through, I had to stop a few times to unclog mud from my gears but apart from that I was feeling strong and going well. I had stuck to my food plan and was drinking as much as I could, the mud was making drinking hard my water bottle tops were caked in mud, so I was drinking muddy water some of the time which wasn’t pleasant. Martyn would get out snacks ready for me and fill my water bottles up. Having a good support crew is really important for endurance racing you need people ready to wash down your bikes, sort out food and keep egging you on when you start to flag. Luckily I had pitched next to a mechanic who helped me out with washing the mud off my bike and oiling my chain to keep things working. Thank you bikecity.biz 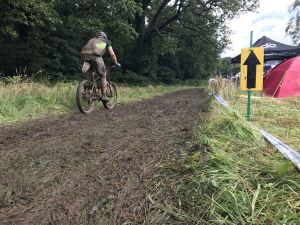 On my third lap I was making my way back into the arena when I heard a crunch, stopping, I saw that my rear mech and hanger were caught in my wheel. The only thing I could do was get off and carry my bike until I made it to the arena where I got some help, frustratingly I had to have a new rear mech which was an expensive and timely process! I took this opportunity to have some warm food and change my soaking wet clothes. 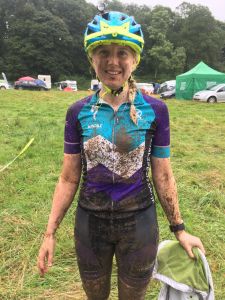 Back in the saddle feeling a little flustered I made my way back to where I had come off course and continued.

At 8pm as planned I pulled off and had a hot food break and a well needed cup of tea before fixing on my Exposure lights and heading back out. In the dark the course felt different the rain sounded louder and the descents were harder. After the Cliff climb was the motivation station reaching this point where the gazebo, dressed in fairy lights boomed out loud music was one of my favourite places on the course it was just before a long wooded section which in the dark was eerie and mysterious. It felt longer and there seemed to be no one else around as I made my way through the mist. I was soon joined by a twinkling light up ahead and had to work hard to catch them for the long fire road descent which took us back up to the motivation station before swooping off down more singletrack.

Once I had got over the idea I might get eaten by the bogey man, riding at night is an interesting experience your other senses come to life as your eyes adjust to the change in lighting I could hear the rain clearly, the crunch of a branch I was suddenly aware of the water dripping down my face and the cold in my fingertips. I felt alive.

To enjoy mountain biking at night you need a good set of lights, ideally a head torch and a handle bar mounted light this helps increase your field of vision. Having a head torch is great and the Exposure Joystick I was using was great through the wooded sections and bomb holes as it allows you to move the light in the direction you need it. On my handle bars I had an Exposure Strada which created a large field of vision in front of my bike.

Nearing the end of my second dark lap I had lost all use of my back brake because of the mud and was having to manage my speed with my front brake, starting to feel tired as well I decided to pop into the mechanic tent to get it looked at. 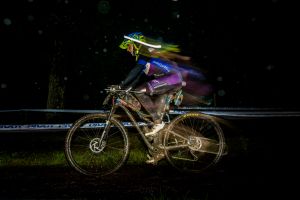 Riding into the arena the rain was being blown sideways under the big lights it was easier to see just how heavily it was coming down.

I stood in a queue to wash the mud off my bike and then took it to the mechanics tent where I waited under the light trying to keep warm. Teeth chattering away I made the decision to have a well-earned rest for a few hours, so after my brake was fixed I headed back to the tent, put some oil on my chain and peeled each sodden layer off. I have never been so muddy! A quick baby wipe shower got most of the mud from my arms, legs and head. My plait was caked in mud and I decided to embrace the mud and get some sleep, after a midnight snack of cheese scone and blueberry muffin of course! It took me ages to stop shivering my whole body was frozen, Luna (the dog) was a great foot warmer.

4am. The alarm started ringing but not quite loud enough to drown out the rain on the tent, I decided to have another hours sleep… 5am I slowly wiggled my way into dry clothes and sorted my bike out as Martyn made porridge and a cup of tea.

Making my way back to the arena to start another lap I felt re-energized, my mood boosted by the appearance of the sun and blue sky! I set off on what was meant to be my first of five laps… The mud had turned to gloop not dissimilar from trying to ride through pva glue and it wasn’t long before I was pushing my bike up a sticky climb at the top I jumped back on, pushed down on the pedal and heard the heart sinking cracking sound. I didn’t need to look, I knew what had just happened although part of my brain would not register there was a problem. I got off and pushed my bike further around the course stopping before the climb to assess the problem. My derailleur was bent out of shaped but had flung itself back I unclogged all the mud, three pedal revolutions later I was back with my feet on the ground unclogging yet again. This time the bend in the derailleur looked worrying, for a split second I wondered if I could push my bike round… that’s not a good idea the rational part of my brain decided and so it was with great frustration that I walked back to the arena with my, yet again, poorly bike. 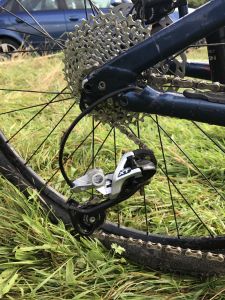 The mechanics couldn’t fix the issue and had no more rear mechs to buy so my race was over. I felt disappointed that I couldn’t finish my race the way I had planned but the lesson learnt was that you can’t plan for everything and sometimes things happen which are beyond our control and we have to just go with the flow. (I am not usually good at doing this). I washed my bike down and headed for a shower. Martyn made me a cup of tea which I enjoyed in the sun as he packed the car. Leaving the arena I decided to just see where I came as I dropped off my exposure lights and couldn’t quite believe it said second place! I needed a second opinion so ran to the car and got Martyn who confirmed that yes my eyes were in good working order. 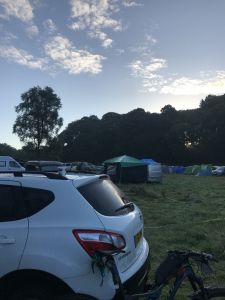 I was really shocked and felt a little bit of a fraud as I had only done 9 laps and had a nice sleep so hadn’t been through the sheer pain and suffering some had. I worked hard for those 9 laps and had solid lap times which I am really happy with. I need to practise getting to the starts earlier which I think will help my overall position.

I enjoyed my first 24 hour race the conditions were super tough but I kept positive and kept pedalling (until my bike broke) I think this event will be one to add to the calendar for next year. 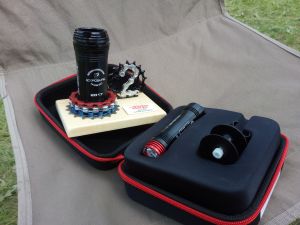