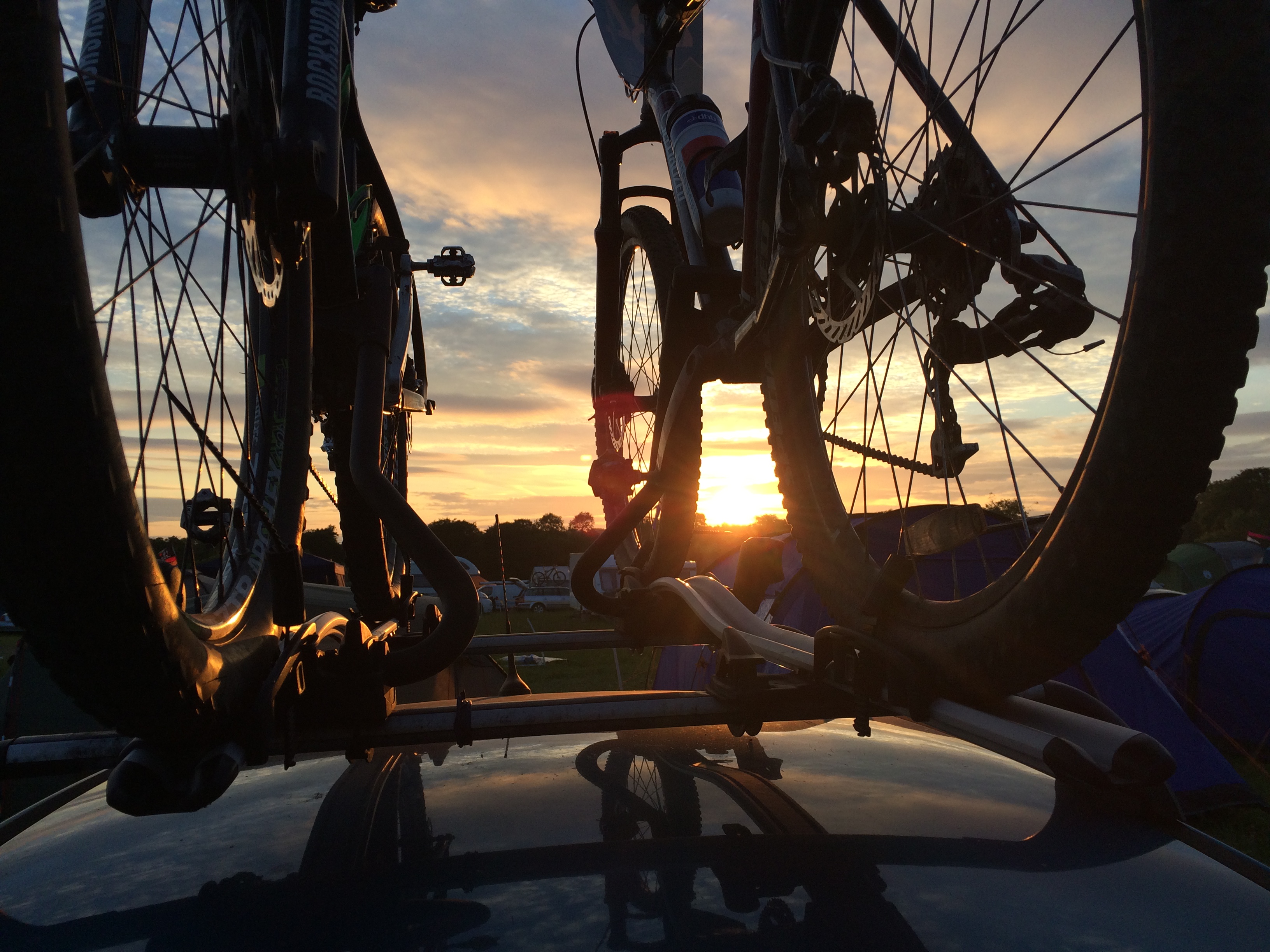 It’s 23:51 and I am waiting for Martyn to finish his first double lap. I don’t usually start blog posts half way through a race, but then my races are not usually in a pair, for 24 hours, so why the hell not! Plus there is so much to remember I need to start now as I fear my brain will not be the same come 12 noon tomorrow!

Today started in the usual way me making breakfast for me and Martyn, the difference today being we would be sharing in this adventure together. After practising the course together yesterday I was excited about racing as a team but hadn’t really considered the fact when one was riding one would be resting so actually apart from the hand over the baton there would not be much ‘time together’ never the less I was excited about the race, along with those beastly pre-race nerves I always get!

At 11 we went to rider briefing followed by a Le Mans style start, I pulled the short straw and started which meant not only would I be riding the first lap I would be running the 800m to my bike! Not one for running I wasn’t thrilled by this idea.

I lined up helmet on bike parked behind me and when the horn sounded slowly crept forward into a run all the time being mindful not to trip or twist my ankle! The first lap went without a hitch and I passed the baton over to Martyn ready for his first lap and headed back to camp.

Now an hour is usually a long period time, but for some reason these ‘resting’ hours seemed to go very quickly compared to the time spent on the bike.. Anyone who can explain this please do!

We had decided to do one lap on one lap off until 6pm and this worked really well I got in some fast lap times, perhaps getting a little over excited!

Each rest stop I would have a small carb snack mainly malt loaf or porridge seemed to be my nutrition of choice, also yoghurt coated peanuts and raisins so scrummy!

6pm arrived quickly and I headed out on my first double lap of the day, half way round I felt like my pedal stroke had become a bit jumpy so stopped and got off and wriggled my crank arm, sure enough my bottom bracket had come loose I gingerly completed the lap, luckily as I came round to our base Martyn was standing on the side line ready to cheer me on so I pulled in after a quick decision Martyn sacrificed his two hour break to go back on the course so I could get my bike fixed. As expected I couldn’t get a new bottom bracket so had to do with getting it tightened.

Once Martyn finished his lap I went back out on my double lap just as the sun started to disappear the forest was so dark I was a bit shocked by how much the tree canopy sheltered the forest floor. It seemed like double laps were becoming my nemesis as this time my headlight gave up on me, so again I pulled into camp which and grabbed a new light before heading back out for my second lap. It now seemed pitch black in the woods, the wind seemed to have picked up and every tree branch now resembled some scary monster trying to pull me off my bike! I worked hard to stick with people not really being a fan of the dark! Especially at the Skratch laps lakeside trail!

I was surprised by how the dark changed the perception of the course, a course I would say after riding it several times I knew well… But things seemed to have moved the smooth line through now had a tree stump and the more technical sections felt hard, I didn’t seem to be able to find the nice flowing lines I had enjoyed earlier in the day. When I came back into the arena this time close to 11pm I new I needed that good two hour break my legs weren’t that tired but my arm and back muscles were sore and I was craving hot food! Meatballs and pasta sorted out this craving and to make sure I was properly re-fuelled I had a porridge pot for good measure!

So I am now sitting in camp waiting for Martyn to get back and the plan is a few hours rest before starting again.

At the moment we are lying in third place and have completed 13 laps so far not bad going for our first 24 hour race. I am very impressed with Martyn’s stamina he has not had time to do much training but seems to be breezing round.

After a well-earned and needed sleep I woke at 5 (slightly later than planned) and got breakfast ready. I had been having some bike issues so Martyn took the first lap. The last couple of hours went by in a blur of eat, ride, repeat. We decided that if I put in a fast last lap and got in just before 12 Martyn could then go back out, this worked well and I completed a fast lap feeling exhausted but proud to have finished as Martyn headed out for his last time. Meanwhile I started to get camp packed down, a little while later I looked up to see Martyn go charging through, sadly I missed his big finish (I’ll be there next year).

We sat down and had a well-earned rest Martyn had a celebratory beer or four! We had held on to our third place even with a 4 hour nap! So felt really happy with our achievement. Going up to collect our trophy from Princess Anne, who owns Gatcombe Park, was a moment I won’t forgot she shook our hands and asked how we divide the laps and I said I did the lions share! Actually only two laps more than Martyn so hardly the lions share but Princess Anne found it amusing. As you can imagine he won’t let me forget this!

Thank you to Pedal 2 Pedal sponsors, Bike Fixers, Dog Tag and Grip Grab. Thank you to the organisers who put on an amazing event it was our first Mayhem and I am sure we will be back!