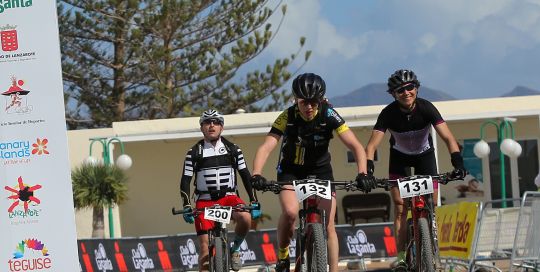 I started riding in 2012, socially completing the Purbeck hill-a-sarus sportive which I really enjoyed.  One day bored, at work I started looking for other events and came across 24 Hours of Exposure, a 24 hour solo event, so I entered, this was to be my first ever race.

This was my 3rd time doing the 4 day stage race at Club La Santa in Lanzarote, 2015, 2017 and now 2018, why do I keep coming back? It’s a great event, great value for money and something to aim for when its cold wet and miserable in the UK.

This year I had the best preparation I have ever had, at the beginning of October I started with a new coach, Sally Bigham, one of the best and most successful stage racers in the world. Sally has been working me hard and I have been putting a lot of hours training in mainly using my Wahoo KickR which is great tool for training especially when training on power and doing quite complicated intervals as it sets everything for you and all you need to do is turn your legs at the right cadence, drink and sweat, a lot!

At the end of September I went to the Torq Fitness HQ to do a Lactate threshold test and FTP.  The Lactate Threshold was all over as I suspect I was coming down with a cold as I woke up the next day full of cold and the FTP numbers were quite low but I had hardly ridden since Alps Epic due to being away with work for a month, my FTP was 198 Watts, about 6 weeks later this went up to 212 Watts and then on Christmas eve I was out riding and everything felt good so I decided to attempt one out on the road, I was amazed, I had jumped up to 266 Watts, a huge improvement and was feeling really strong, then on the 2nd of January I suffered another Asthma Attack which took around a week to get over and my training in January really took a hit, after that I was away with work again and then busy moving house so prior to flying to Lanzarote I had barely ridden.

I had been told not to ride too hard as I hadn’t ridden much in the lead up to the race, I started out nice and steady on the road until we hit the dirt, I felt good so I pushed and pushed and pushed, everything felt so good the bike was great my legs felt strong so off I went, this stage was different to past years so I couldn’t really compare the times but my position amongst the other Brits out told me I had seen quite a lot of improvement so I was very happy. The conditions were tough as well, high winds and cooler than normal made things tough. 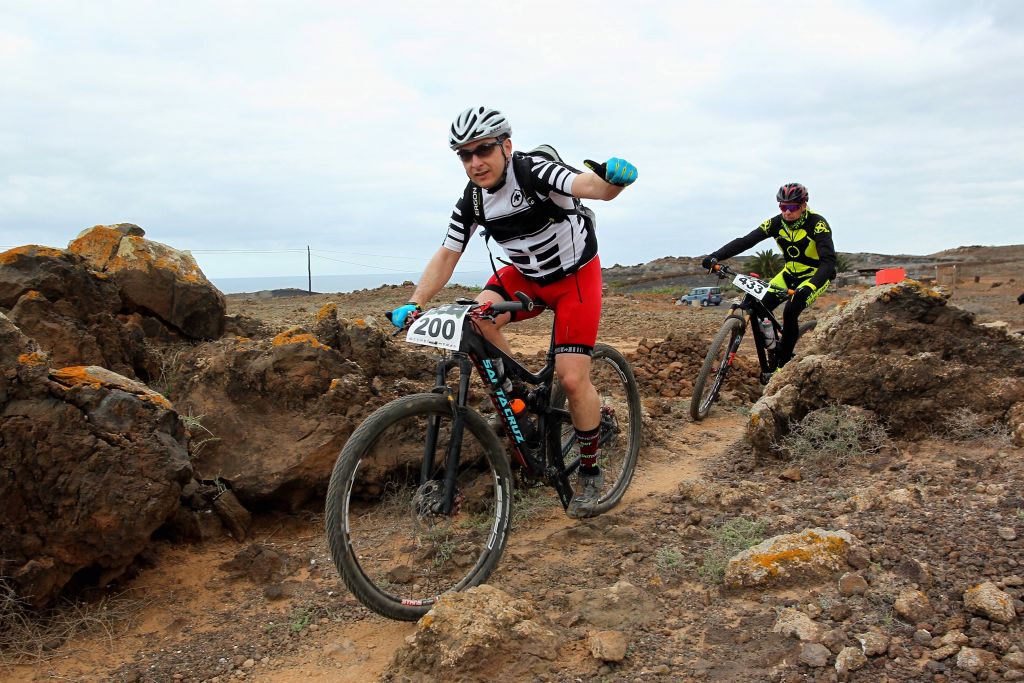 On Stage Two I decided to ride with my friend Sarah Hewitt, she was sat in 2nd place after Stage One and I knew there was going to be some tough sections on this stage with the head winds so I rode with her and acted as a wind block for her. I really enjoyed working together, we worked hard in tough conditions and she retained second place. About 5km from the end of the stage I had a mechanical, my gear cable had pulled through and I couldn’t shift out of the hardest gear, after a couple of minutes deciding if I carry on in the hard gear or fix it I decided to fix it, Sarah carried on so as not to lose any time, it only took a couple of minutes to fix and I probably lost 5 places by the end, I got back on and set about chasing down some of those that had passed me, I had passed a couple and had caught a British Army rider so I decided to sit in and recover before passing him as I could see Sarah not too far ahead of me, however I switched off a little bit too much and decided to have a lay down in some soft sand, fortunately no injuries bar some bruising to my hip and thigh and somehow I had missed any of the Lava Rock.  Again this stage was different to previous years so no comparison could be made to previous years but I was happy with my performance and position and Sarah was still in second place in her category.

Stage three is the individual Time Trial, you start on the Beach in Famara and finish on the top of the cliff above.  My start time was much later than everyone else so they all got the bus down in the morning and I decided to ride down later as this would act as a good warm up prior to the stage.  Again I was still feeling strong and this was the one stage where I could have a direct comparison to previous years, last year I had completed the 22km in 1:38 so I set my self a target time of 1:30.  I set off and was feeling strong again, I pushed hard all the way except on the descents, the cross winds were that bad I was being blown of the track and had to slow down and lost some time on these sections.  The final climb was tough, with a strong headwind and it was cold, I actually felt very cold in the last 1/3 of the climb, but I pushed on and worked at my limit with an average heart rate of 181bpm and a max of 192bpm. I was over the moon when I crossed the line at 1:22, 8 minutes quicker than my target time and 16 minutes quicker than last year.

Stage four is the big one, 84.5km and the route was very similar to last year all be it 2km shorter.  I rode with Sarah again which was really good, we jumped between groups in the headwinds, me working on the front as I know I could recover on the descents. My Santa Cruz Tallboy is the perfect bike for Stage racing, I nice position and I have fitted it with a dropper post which was great for the descents.  Part way through the stage there is a 10km climb and leading in to it is a drag on a fire track in to a headwind, I knew what was coming but still pushed hard along here, gaining a few places and catching some riders that were up ahead, I knew Sarah would be stronger than me on the climb but I also knew I could catch her on the descent the other side so off she went into the distance and I plugged away, I was suffering with some lower back pain which didn’t help and the winds were still strong as we climbed, but even with all of this I felt stronger than I had before so pushed on.  As I thought I caught Sarah on the Technical descent and waited for her at the bottom which gave me a chance to stretch which really helped and maybe something I should have taken time for earlier… We carried on the stage together and continued to gain places. 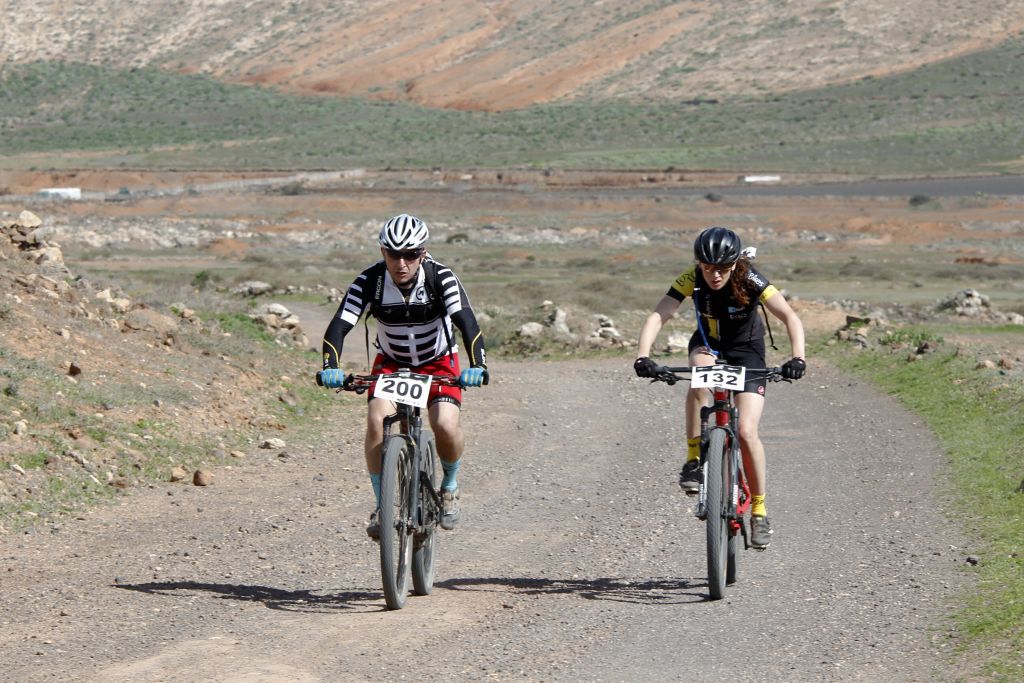 The last 15km or so were in to a strong headwind so head down and keep pushing, Sarah did say after that she moved to take a turn on the front, pulled out from behind, felt the head win and tucked back in, it was tough and I have never been able to work that hard for that long, as we pushed closer to the finish I spotted two riders ahead and was pretty sure one of them was the lady that was leading the category Sarah was in so I pushed harder, making sure Sarah was still with me but hadn’t told her that I thought her main competition was up ahead, we caught with about 3km to go and passed her and her friend very quickly but she had jumped on the back, the last few Km’s were tight and twisty so I was pushing but trying not to push too hard but also making sure that I hadn’t lost Sarah and was towing the other lady instead, I knew it would be a sprint finish for them so as we came in to Club La Santa I pulled over to the side and let them pass, Sarah took the sprint and the stage and finished second overall.  My time for this year was amazing, last year was over 6 hours, this year was 5:12, so a huge improvement for me, would I have pushed so hard if I had been on my own I’m not sure, having someone else to ride for and ride with really pushed me on, now to convince Sarah we need to pair up for a big stage race like the Bike Transalp. 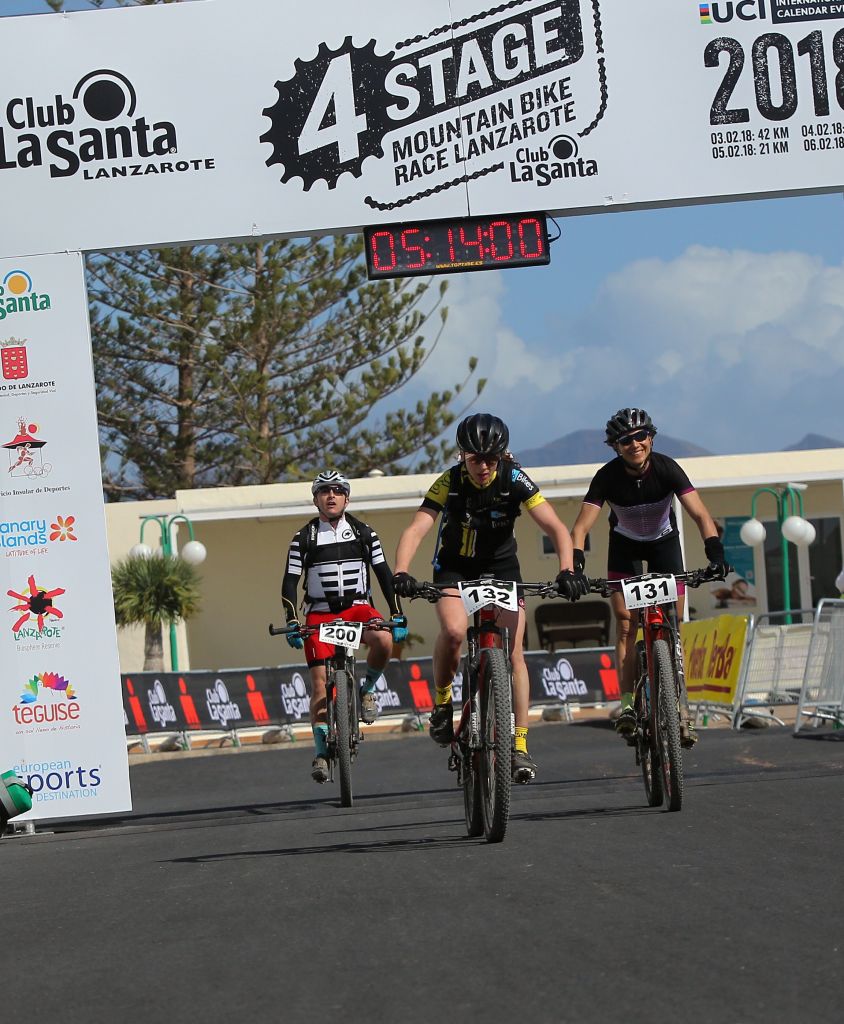 I am very happy with my results this year and have seen huge improvements thanks to my amazing coach Sally Bigham, my next big event is Transpyr in June which I will be doing solo, 800km, 18200m’s climbing in seven days.