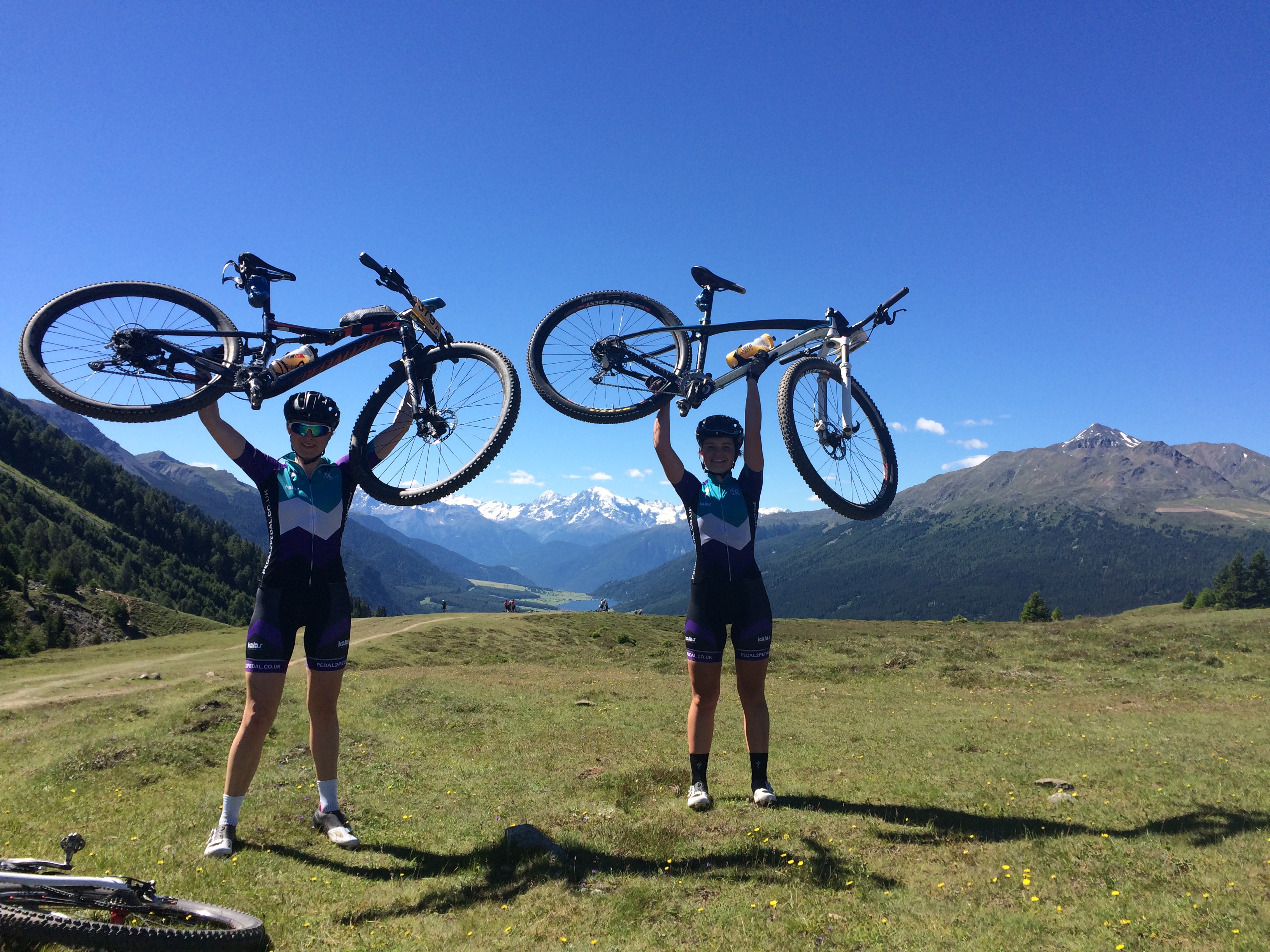 Arriving at the Bike Trans Alp in Austria

We arrived in Imst, Austria for the start of the Bike Trans Alp on Thursday evening very late after a 17 hour journey from the from home. Dad was amazing and drove all the way do So I would have ample time to get used to the climate and altitude.

We spent Friday and Saturday playing around on the trails which was great fun and Dad got to use his new cameras which he was super happy about!

The start of the Bike Trans Alp.

Day one – the long one

The start was exciting and full of people buzzing around, Michelle and I were gridded right at the back as we had never raced any stage races before, but that was fine with me I was just happy to have made it this far!

Just after 9 we rolled over the start line for a day of highs lows, ups and downs.

The race started with a tar mac climb through the village it was great with people cheering and ringing bells it reminded me of the start of Ride London.

The day started cloudy but soon the sun shone brightly down making the hill climbing hot and dusty work!

The climbing was rewarded with the most amazing scenery through the mountain passes. At points after climbing we would sweep back down into the valley and through picturesque little towns full of people cheering which really lifted my spirits and kept me going.

It was in one of these little towns I turned the corner and bumped into Dad it was great to see him and also good timing as I had run out of water!

Tom and Dad supported Michelle and I with bottles along the route which was fantastic thanks guys!

The vertical challenge was a timed stage, it was an unrelenting climb which went on forever! The climb went on and on after this vertical stage until we reached the top of the mountain pass. The reward was a sensational downhill through woods and out into open pastures through the valley.

We were making good time and the hours were flying passed, the final 20km was tough. We had worked hard on a road section to stay with a bunch and I paid for this on the hill climb later, luckily just before the climb was a water point where I indulged in cucumber dipped in salt and water melon my new favourite snack!

The last 9km was almost all up hill and seemed to go on forever! The finish line in Nauders was even up hill!

It feels good to have completed the first day I learnt a lot and we had good fun as a team once we settled into a rhythm.

We finished the first stage in 6 hours 16 a great first day and 89km ticked off!

The first 10km was up. The up was on gravel track most of the way which was loose making the climbing arduous. We climbed under lift stations and im pretty sure when there is snow this is probably a blue run!

We made it to the water point at the top, passing groups of cows who I think thought we must be mad! The water point was a light bit of relief, it was good to stop stretch out and have some much needed water melon!

The next descent was loose with great sweeping bends but was over too quickly and we were climbing yet again!

My favourite stage today was the Maxxis endure challenge although I found it difficult and walked in places, it was great fun and being in wooded single-track reminded me so much of Wales and after a tough climb it was nice to remind myself of why I was here!

You can probably already guess but after this came yet more climbing! Today has been really hot and the heat has got to me slightly so I had to pace myself on this second long climb, the view from the top was incredible and well worth the sweat to get there.

Today we have ridden in three countries, climbed to the dizzy heights of 2270m, ate a shed load of water melon, and enjoyed stunning views and blistering heat!

All in all a good, but tough day in the saddle. The end was tough for me today, the heat sapped my energy and I was glad to finish. 5 hours 01 minutes, 56km and day two completed!

Tomorrow we ride from Scoul to Livigno. Stick around for more on our Alpine adventure.

Thank you to my amazing Dad for supporting this trip and to everyone at home cheering us on!

Thank you also to Specialized for my super Era which has been a dream to ride so far, thanks to Bike Fixers, Dog Tag and Grip Grab for all your support.