The Carpathian MTB Epic – Stage One 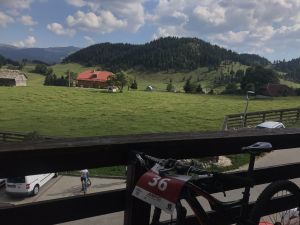 Friday was the first stage of the Carpathian MTB Epic. The day started with a hearty breakfast and plenty of procrastination on my part.

After what seemed like an age waiting in the starting box the music fell silent and the loud heart beat timer started our count down, I could feel my heart racing and tried to control my breathing. The starter sounded and the sounds of clicking pedals and gear shifts filled the air as we set off out of the race village towards, what for me, was about to be an awesome day in the saddle.

The climbing and heat hit me straight away as the other riders pulled further up the road, I knew I needed to pace myself after all I was here for the enjoyment and adventure not to ‘race’ but as a ‘racer’ that can be quite difficult to get your head round. The course took us through some spectacular scenery we climbed up on to a ridge line, where the first feed station sat, at just over 12km into the race. It had been a mixture of ‘hike a bike’ and gradual climbing to get here up fire roads with horses grazing in the woods and loggers hauling huge trees behind tractors.

I looked up at the climb to the top of the peak and ate another date, I was going to need all my energy for this one! Once up this short sharp climb the course stayed high and traversed the sky line, the view was incredible! The first proper ‘descent’ felt very steep and loose.

The next few hours are a bit of a blur the course continued to be gruelling and amazing at the same time. The clouds had once again pulled in and the thunder in the distance worried me, it was going to get wet, very wet! I stopped and put my rain jacket on and continued my descent towards Feed Zone 2, reaching this I was right to put my jacket on when I did as the heavens open and within seconds everything was washed out, the next section was a road climb which seemed to go on forever, the road had become a river and the rain was making it hard to see.

I was relieved to be off the road and back to the gravel; even though this was harder to climb I didn’t have to worry about the cars. The route meandered through the valley with towering rock cliffs on one side and the open meadows on the other, farmers and their cattle watched on as I slowly made my way around the course following a stream which then became a river to cross before tracking the valley on the other side. I could see little dots behind me, which I thought were cyclists and it felt comforting to know I wasn’t the only one!

The climb continued and on reaching the top the huge rock face stood in the distance, you’re going over there said the marshal, wow it looked far away!

Continuing along and down I was surprised to reach the rock face quicker than I anticipated proving that all you have to do is keep pushing those pedals and you will eventually make it. 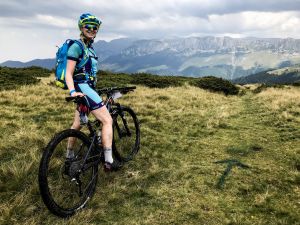 The next climb was exhausting and I really began to question the ‘fun factor’, it was a grassy climb and in the wet my shoes kept slipping and it seemed to take hours to reach the marshals who were lovely, they said one little bit of up then it’s all down! That sounded promising.

Of course that’s not quite how it went it was more like up, down, up, down, up then down.

It was a spectacular descent now on the other side of the rock face and open valley to my left the descent was rocky and challenging I kept my wits about me as I negotiated the rocks enjoying the challenge. The trail led into the woods where I felt really at home working my way through rooty sections, looking for the best line when the trail was off camber and holding on for dear life when it got rather steep in more than one place! Sometimes the descents would be gradual and then turn steep and committing 100% was the only way to make it down, the descents pushed my ability and belief in myself but time after time I made it to the bottom without coming off. The final 10km was hard work the descent for 4km to the road was a rutted field with steep sections that came out of nowhere the last 5km up the road was a killer, pain seems to be a prerequisite of cycling so I sucked it up and pedalled on. Soon enough the white archway was in site and I crossed the finish line.

Stage one down, two to go!