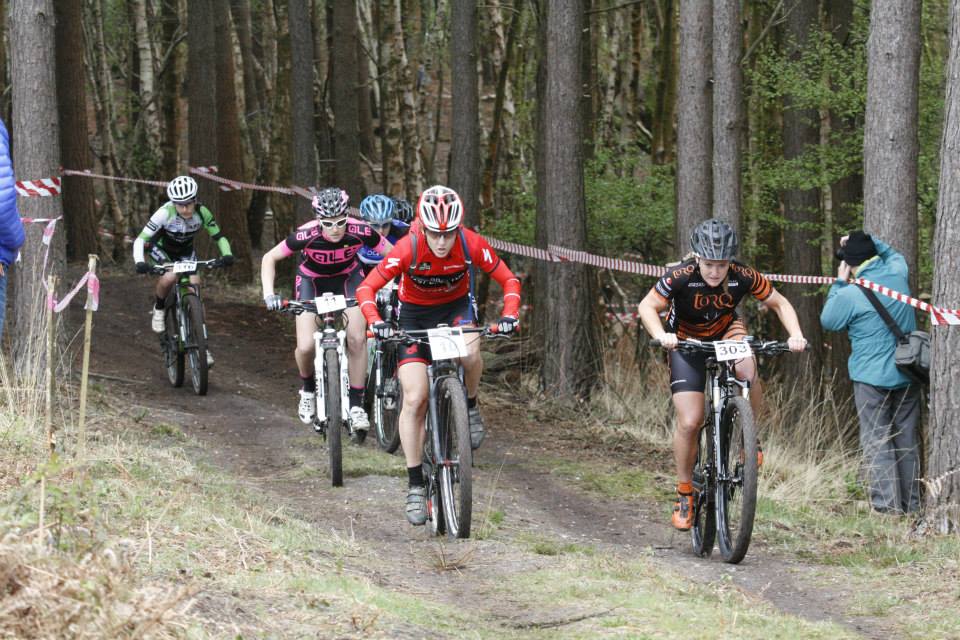 Today was the Southern Cross Country series at Crow Hill, in the New Forest. This was my third race in 3 weeks. So feeling a little tired and having  done nothing all week due to a swollen ankle, preparations were not their best.

I had been unsure all week if I should race and finally decided on Thursday that as the race was only an hour away it was worth a shot and hopefully I would gain some more points towards my ranking.

Arriving at Crow Hill I felt relaxed (unusual for me on race day) as I had taken the pressure off by saying just go along and ride.

Practise went well and my ankle felt alright and as long as I clipped out gently,  it didn’t cause too much agro. The course at Crow Hill is great, relatively flat with twisty sections in the forest, tied together with fire road. It was rather slippy in places and a few tree roots were already starting to lose their bark and reveal white flesh which was being polished under so many people taking the same line!

I finished my practise lap in time to see Fred, who I coach and who now races for Pedal 2 Pedal, ride home to take third place in the under nines race. After watching his podium, feeling very proud of his achievements  I went off to warm up.

Arriving on the start line I still felt calm, which was a nice change from my normal nervous feeling!

The race started on an incline and I got a great start, unlike last week in the Nationals and left the arena in fourth position. This huge burst of energy cost me though and as I recovered in the single track and the path opened up I was over taken by a couple of riders but kept pressing on.  A silly mistake on a corner in my first lap ended my grip on the group and cost me greatly in time.

I pushed on and felt okay during my second lap, even enjoying it to a certain extent. I hadn’t managed to take on as much water or food as I would usually, but as I was taking it slightly more gently than usual I thought I’d be okay. This was not to be the case and as I pulled up the hill ready for my third lap I knew my pace had dropped to a crawl! I pushed on the pedals but my legs had nothing left in them. My heart rate had dropped to around 166bpm so I knew I had loads more to give,  but my strength had been sucked away and my tired legs felt heavy.

Someone once told me that when things are tough, all you can keep doing is the right thing, so today that’s what I did. I kept turning the pedals and pushed as much as I could making the most of the downhills to recover and altering my cadence to ease the pressure on my legs and ankle which was now starting to feel a bit sore.

Coming into my fourth lap knowing I had two more to go was hard work. When you have lost touch with other riders it makes it ten times more difficult to push on because you have nothing  in your sights to push on to!

As I was coming back round to cross the arena Cat Ross (Specialized Ruslip) over took me, I felt a wave of disappointment at being lapped as well as a tiny bit of relief at not having to do a fifth lap.

Every race I learn something different. Today I learnt that a big sprint start will cost me dearly in energy so to make sure I am fuelling well.

Thank you to Bike Fixers for making sure my bike was in tip top condition, Grip Grab for keeping me warm (I needed my leg warmers today) and Dog Tag for your support with Pedal 2 pedal.