In 2016 a couple of friends had completed the first ever Alps Epic, having followed their progress I decided this was the event for me in 2017, so when I noticed the early bird offer of €500 I entered straight away.

The Alps Epic is a pairs event but I hadn’t even thought that far ahead yet and just entered with a plan to sort the partner bit out later.

After posting on Facebook that I had entered I got a message from a friend who I had been riding with a while with a local club and within an hour he had entered as well and that was the partner issue sorted.

The next few months didn’t really go to plan with training and I will be the first to admit that I wasn’t anywhere near as well prepared as I could have been.

Jump forward to June and after a full day at work the car was packed up and off we headed to Dover to get a 10pm ferry to France, I then drove through the night until we reached a town called La Plange which was around a 4-hour drive from the race start, we had 2 nights here before then driving down to the start town of Montgenvre.

One of the first things we noticed was how cold it was at 1800m plus above sea level where we were staying which got me concerned as I didn’t really have any warm clothing with me except a Gillet and a waterproof top, so on route to Montgenvre we stopped off in Val D’isere and I managed to get myself a warm top.

The sights on route driving through the Alps were amazing and the #cantcopythealps is very fitting, for anyone that has never been it should be a must on your list of places to visit. 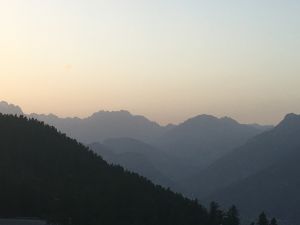 We arrived in Montgenvre and found our accommodation for the night, this night was €50 for the night and included food as well which was perfect so no hassle as this would be where we would stay for the next 3 nights.

We completed our registration and collected our packs and numbers.

Stage 1 was a short Prologue stage and didn’t start till the afternoon, I found this really tough, a combination of the altitude and heat, yes after all my concern a couple of days earlier of it being cold, it wasn’t it was really warm, mid to high 30’s every day.

The next day was the first proper stage, loop back to Montgenerve of 61 Km and 2750m of climbing starting with a 7km climb.

All started off well and we got into a good rhythm on the climb until James chain snapped, after quickly fitting a power link we carried on and soon reached the first feed station, we didn’t take much as both still had a fair amount in our camel backs and there was another feed station in 20Km, so off we went onto the next climb before our first taste of the proper descents, tight switch back after tight switch back. 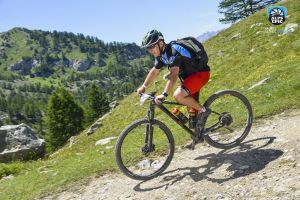 We passed through the time cut off point and started the climb to the next feed station, this is where I really began struggle and noticed I had the route sweeper and medic for company on an Ebike.

I pushed on to the feed station and by the time I made it there I was not in a good way, I sat down in the shade and took on some fluids and food as the medic checked me over before telling me I needed a drip as I was very dehydrated.

They called down to race HQ and another medic arrived and took over, allowing him to carry on following the route, James also carried on and finished the stage.

Meanwhile I had a drip put in at the feed station and was taken back down to the race finish in a 4×4.

At Race HQ I was given a once over by the event doctor and ate his salted crisps before being given the okay to carry on the next day.

The next day the plan was a different one and I took 3 litres of Torq Energy in my camel back and 2 x 750ml of Hypotonic drink in a bottle, by the first feed station a lot of this was gone, we filled everything back up and carried on. Unfortunately, we missed the cut off by a matter of minutes at the next feed station and couldn’t carry on the stage. 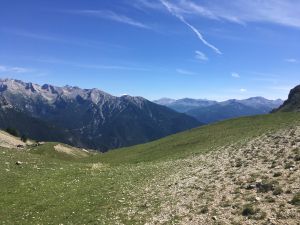 Day 4 was a much better day and we started well, apart from forgetting my gloves which led to some sunburn on the backs of my hands. We settled into a long climb at the start and the descents again were incredible and like nothing I have ridden before, this included a full on bucking bronco moment at 30mph that I somehow managed to keep hold of. The 29er carbon Hardtail was defiantly not the bike of choice for this event.  We completed stage 4 in 7 hours 40 minutes.

Unfortunately, I was still struggling with getting my breath and even walking upstairs or a slight slope was hard work let alone riding a bike for 7-8 hours, I was also bringing up all kinds of funky stuff when I coughed! So, after a chat with James and the event doctor I decided to miss stage 5 and see how I felt after that.

So, I spent day 5 helping the organisers with laundry and whatever else I could do to help, unfortunately I was still not feeling any better for stage 6 so I sat it out and let James ride with a couple of guys from Oxfordshire with a team name of the Gnarly Nutters.

I was gutted to have missed the finish of the event but sometimes you just know something isn’t right.

The after party was great with lots of free beer and a huge BBQ.  The food and hospitality throughout the event was incredible and everything was taken care of from your laundry to your bike.

At the end of every stage you racked your bike, it was then taken and washed before getting a once over from the team of mechanics before being taken to the over night secure storage area, all you had to do was check your tyre pressures and lube the chain and away you go again.

There was also massages at the end of the stage all included in the price and a huge buffet of food to refuel you along with an evening meal and huge and varied breakfast every day.

Everything was thought of and done for you, all you had to do was ride your bike, eat, sleep and repeat. 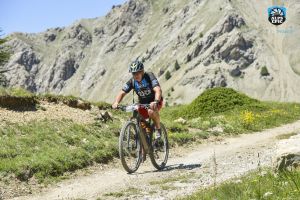 On returning from the event I visited my GP and was given an Inhaler and have since been diagnosed with exercise induced Asthma.

This is defiantly an event that I will be coming back to again maybe as a mixed pair with an eye on a podium.

I have learnt so much from this event and hopefully it will all help me in my next challenge.

Next year I am taking on the Transpyr solo, but I’m not making the same mistakes again.  I was nowhere near well enough prepared physically and the work on that has already started with the help of my new coach and Mountain Bike Stage Race and Marathon Racing legend, Sally Bigham, who is really starting to put me through my paces and will have me in the best shape I can be in come June 2018.

I have also changed bikes and I’m now on a Santa Cruz Tallboy 2 full Suss with dropperpost as opposed to a Cube carbon hardtail 29er.