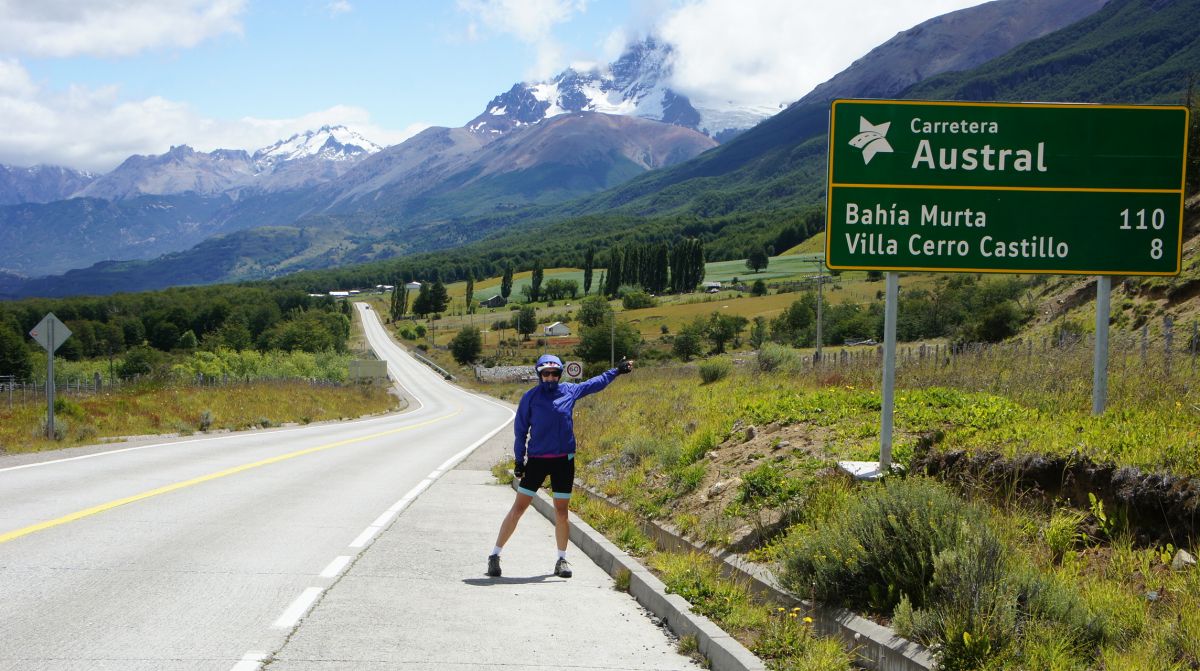 Happy January! Below is my first guest blog of the New year! I hope you enjoy it, here is an introduce from Tara a.k.a Paps.

It’s Christmas 2016 and I’m running full pelt through Madrid airport to catch a connecting flight that’s about to leave (I’d already missed my original one due to delays) to take me to Santiago, Chile. I eventually arrive to find my luggage didn’t make it. I’m not surprised; delays and me catching a different flight meant it was unlikely to be on the same airplane. But I didn’t expect 4 days later to still not have my bag, and no one able to tell me where it was.

I’d come to Chile to cycle the Carretera Austral, Chile’s Route 7, a road that runs 1,240 kilometers (770 mi) from Puerto Montt to Villa O’Higgins through rural Patagonia. In that bag was all my gear. And I mean all. All my cycling kit, my camping kit, clothes, first aid kit, cooking equipment, toiletries, toothbrush etc. All I had was the one set of clothes I travelled in and my electronics. Luckily I hadn’t lost my bike, as we were hiring those in Chile. After many fruitless, head-banging phone calls to the airline, I resigned myself to the fact my bag wasn’t going to turn up because no-one knew where it was, seemingly lost forever. 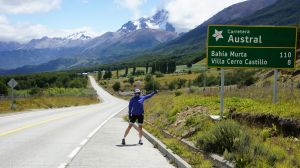 Not doing the trip was never an option, and luckily my cycling buddy extraordinaire Helen had some kit we could both use (cooking, first aid kit, toolkit). So, armed with my credit card, I bought the very basic kit I could get away with having (tent, sleeping bag, cycling shorts etc.) and tried not to think about the carefully selected kit as a result of weeks of research sat in my bag somewhere between Spain and Chile and the many extra ££ now spent. “Just think of the stories that might come out of this” messaged one of my friends. I laughed, but she wasn’t the one sat in a hotel in Chile wearing 99p pants.

So on January 1st, after broken sleep with being woken up by what sounded like gunshots and explosions (but were really New Years Eve fireworks), and horrific sunburn from a day’s exploring without regard to quite how strong the sun was, Helen and I wobbled out of Puerto Montt on our loaded bikes without much food as we hadn’t realised all shops shut on New Year’s Eve as well as the 1st. Luckily, we passed a small bakery on the way out that didn’t care about public holidays and filled our bags up with ham, cheese and bread, a meal that didn’t last long as a staple lunch item due to the bread being drier and more powdery than a mouthful of talcum powder (this was later replaced with frankfurter sausages in tortilla wraps, which were, quite frankly, lunch of the gods). 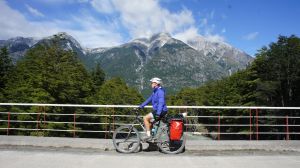 At the first [slight] hill we had to push the bikes, and it was at this point we realised it might be more challenging than we first thought. 70% of the route is unpaved ripio (gravel) and here we were, pushing bikes up a smooth tarmac gradient.

Negotiating ferries is essential in the first part of the ride as there are a few bodies of water to cross. There’s not much to it really – buy the ticket, walk your bike on, tie it to something secure on the side of the boat, have a sit down and then do all that in reverse when reaching the other side. Until it came to the two-ferry trip where you have to get two boats and get across a 10km bit of land in between. Somehow, in a heavy-rain-and-lots-of-people melee where all bike and foot passengers have to hitch a ride with vehicle passengers, we managed to lose our bikes in the back of a lorry which ended up on a different ferry and then subsequently drove off with our bike and all our gear. Yes, that’s right, all. Again. For the second time in the space of a few days, I had lost everything I owned, bar the cycling gear I was wearing and my mobile phone. 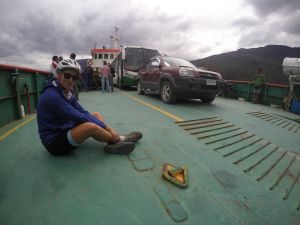 What else to do but laugh, right? Hysterically. Using the power of mime and one ferry worker who spoke a few words of English, the Carabineros de Chile (Police) were called and the situation explained. Put back on the ferry for many hours, we were generously given hot food and something to drink in the crew room, then, after having to jump across to another ferry in the middle of the ocean, we ended up in the back of a Chilean couple’s car with instructions to take us to the Police Station in the next town, 60km away. At least it was dry and warm in the car, with the weather having taken a turn, raining non-stop for the last two days. I knew I shouldn’t have skipped the ‘Chilean weather’ research in favour of deciding what colour socks to take.

When you think that everything is gone, the moment your eyes set sight on it again is nothing short of miraculous. So when we saw both our bikes with the now-familiar red and blue Ortlieb panniers shining like beacons outside the police station in the dark, we both actually gasped, screeched and jumped up and down like we’d just won the lottery. We had no idea what the police officer, or two random men were saying, or why they were shaking our hands, or what had happened with the bikes, but we were too excited to care and jumped on the bikes and rode off into the sunset (well, a nearby hostel).

Eager to get going, we had a fabulous day with renewed enthusiasm (despite the still-constant rain and my chain which kept coming off) and spent that night bedding down in a Blair Witch-style abandoned house, happy to be warm and dry but unsure as to whether we’d wake up in the morning. Luckily we did. This area of Chile is actually one of the safest (and remote) places you can be. We’d finally started to hit the ripio and get away from civilisation. We’d also started to hit hills, lush rainforests and could see snow-capped mountains in the distance. 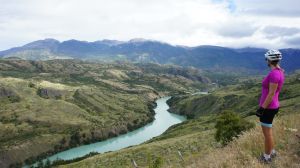 A couple of days later and we hit the Hill of Horror. A hill that seemed to go on and on and on. And it was pelting it down with rain, hard. The downhill was so cold and wet my hands froze and cramped and my brakes were down to the metal; I honestly thought I’d end up a mangled mess at the side of the road after falling off and would have celebrated not doing so had I not been so cold and wet at the bottom I couldn’t stop shivering and my teeth chattering.

A night of heavy rain later I woke up to things being a bit damp and claustrophobic in my tent and realised my brand new tent had a broken pole and effectively collapsed in on me. My mobile phone had broken the day before, I was still cold, wet and hungry, and it was still raining. This was the final straw. I just couldn’t face cycling that day, and neither could Helen, so we hitch-hiked with the bikes the 150km we still had to go to the city of Coyhaique for a couple of days off the bike and to buy more [warm] clothes, fix my tent and do a bit of bike maintenance.

Two days of new kit, being warm and dry, meeting Pirate Mike, organising ourselves better with food, and the best egg and chips I’ve ever had, we were itching to rock and roll again, in the bloody rain if we had to (we had bought snazzy ponchos, so screw you rain). Ironically, it was to be the last we saw of cycling in rain for a couple of weeks, much to our satisfaction. 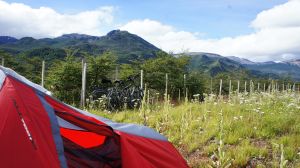 The next couple of weeks brought the kind of joy cycle touring is all about; amazing views, an abundance of sounds and smells, the kind of tiredness at the end of the day which can only be attributed to a days hard cycling and constant eating. Waking up to the sound of a woodpecker, wild camping in a spot tucked away from the road and still miles away from anyone. Applying chamois cream half naked by the road in the sunshine. Scenery so beautiful in layers of colours it looks like a painting. Whizzing down a hill, the world spread out in front of you as far as you can see and knowing it’s your own legs that got you there with every pedal, every hill, every bend. Stripping everything back to the basics; food, water, shelter (and chocolate).

Cans of coke become the most precious thing, and even the most basic food becomes the best thing on earth. Legs burn with white-hot pains with the effort of going uphill, giving me goosebumps in the sun. Laughter and chatter while cycling alongside stunningly blue lakes which afront the jagged, snow-capped mountain ranges.

Day after day of cycling on the corrugated gravel with heavy panniers took its toll on the pannier racks. Both racks snapped in multiple places, held together right until the end by duct tape. Each day when finding a wild camp spot, we’d look at each other in amazement that we’d made another day with our luggage staying on the back of the bikes, and add another layer of duct tape, like some kind of reverse pass-the parcel, the prize being to carry our belongings another day. 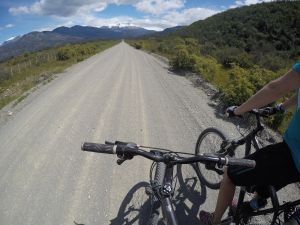 With each kilometre that passed, we became acutely aware that the adventure was drawing to an end and we were getting closer to Villa O’Higgins, the end of the road (literally). The last few days were a mix of feelings; increasing excitement that we’d actually make it and an incredible sadness that soon, it would all be over. I think my bike felt the same, and on the last day decided to throw me off onto the ripio, where I left a big layer of my arm skin on the rocks as a souvenir.  Undeterred and dripping with blood, we cycled on with one of the best day’s cycling to finally reach Villa O’Higgins in a haze of excitement, cravings for a cold can of coke and slight disbelief that yes, we’d actually done it. We’d actually bloody gone and done it!