I’m Chris Astill-Smith, 25 years old from Devizes, Wiltshire. There were a couple of reasons why I chose to swim the channel, the first one being that I wanted to set myself a serious challenge, a challenge that would only be possible with a lot of hard work and dedication. I’ve always been a strong swimmer since a young age but never a professional. I used to swim for my local club from ages 12-18 and was more of a sprint swimmer, so when I decided to swim the English Channel I had no endurance experience, let along open water experience. The second reason was that I wanted to raise money for a small charity, one that was close to my heart called Dreams Come True. Dreams Come True is a small U.K charity that helps kids with life-limiting conditions achieve their dreams. I didn’t want to choose a large charity, where all my fundraising efforts would just get spent on admin or marketing costs, I truly wanted to be able to help those that needed it the most. In total £23,500 was raised for DCT from my swim and I’m so happy to have been able to meet lots of the children who’ve directly benefited. My 3 top tips for anyone thinking about swimming the channel would be:
1) Take on other big swims prior & learn from your mistakes. I took on Lake Windermere a year before my English Channel swim. Lake Windermere is an 18km swim in the Lake District. After only 4 months of training this was a huge challenge and to this day it still remains the hardest thing I’ve ever done in my life. I tore my right bicep tendon after about 10km and stupidly decided to carry on in such pain. It took 4 months of rehab to recover from that injury and had to completely change my technique. However, if that hadn’t of happened, I may of never decided to change my technique and never completed the Channel.
2) Test your feeding plan. It’s so important to keep testing which foods your body can handle while swimming. Numerous times my body would reject certain foods during my training which proved crucial to the big swim. Nutrition is so important when doing any long distance swim because without it your body just won’t be able to go the distance. 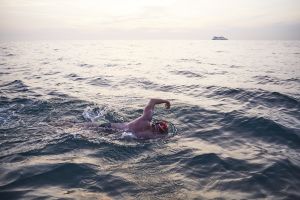 3) Don’t waste time in the water. Another big tip would be to not waste time taking breaks across the channel. First of all you have the tides pulling you up and down the Channel, so any time you’re not swimming you’re being pushed further up or down with the tides. The tides get much stronger closer to France so the closer you are to France before the tides change direction the more chance you’ll have of making it. Another reason why you don’t want to be wasting time in the water is that when you’re not moving you’re body is getting cold. You have to keep generating heat to keep warm. I was spending between 30-45 seconds on each feed, that was enough.