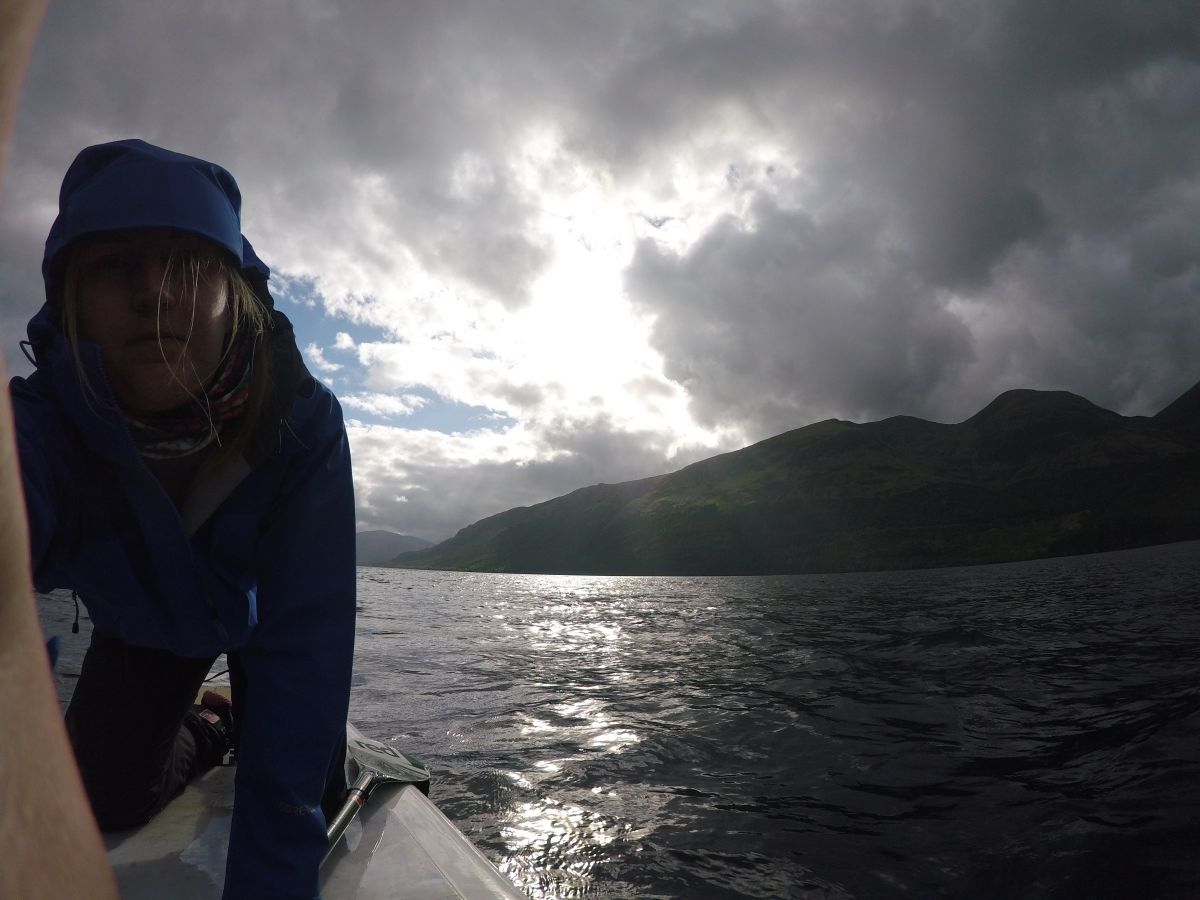 Hi folks! Here is the second in my guest blog series from Helen Read.

Helen was always really active as a youngster, getting involved in anything and everything she could, but lost the outdoors in her 20s. When going through a period of anxiety and depression, her friends persuaded her to train for and attempt to hike the Welsh 3000 that reinvigorated her love for the mountains and fresh air.

Ever since she has been on a quest to live the adventurous life that she is truly passionate about and helps her regulate the stresses of daily life. Whenever she has the opportunity she will be up a hill (or possibly under one) or on the water generally avoiding cities. One downside of liking so many different adventure sports is that it takes a very long time to improve ability, so she is currently planning a year away from work living the van life round Europe in order to focus more time on each one.

I woke up in my camper-van to a misty morning at the foot of Ben Nevis. It was the second week of my adventures in Scotland and I was feeling the difference between my normal office days and daily mountainous excursions that I’d had for the last 10 days.

By the time I persuaded myself to get up it was 10 and after stocking up on food for the coming trip I eventually found myself at the top of Neptune’s Staircase by lunchtime and the start of my adventure.

It was a strange feeling paddling away from my van and into the unknown, About 20 minutes in and Scotland did what Scotland does best as it started raining, luckily I was already togged up in my wetsuit (overkill) and waterproofs (entirely necessary) and it was a canal stretch so the water was calm, making negotiating the scout group not too troublesome.

Happy despite the rain

My first lock didn’t go entirely to plan. The first pair was inexplicably open so I paddled through, hoping there would be a landing stage in the middle that could hop out at so I’d only have to portage the last bit, but unfortunately not, so I had to paddle back out and walk around.

This was my first attempt at portaging and was not my most graceful. As it was such a long way I wanted to do it in one, so I put all my baggage in the paddle board bag (which luckily has wheels) with the paddle sticking out of the top, and the paddleboard in the other hand waddling up the tow-path, having to stop every 15m or so because my hand hurt. 20kg of board is quite a lot on one tiny handle! For future locks it wasn’t quite so far so I tended to do 2 trips, except for when the lovely lock-keeper at Loch Lochy insisted on giving me a hand.

It wasn’t long into my paddle that I realised I had forgotten to bring the little map that I had been given when I picked up a key for the lock facilities. So at that lock, I thought I’d carry on, still feeling pretty fresh at 4.30 because I started so late. That was a mistake.

As I rounded the bend, heading east from Gairlochy lock, I discovered I had just set out on a loch. It wasn’t long before the exposure had let the wind pick up the water into little waves that made balancing extremely tricky and led me to resort to kneeling. I intended to follow the navigation buoys effectively through the middle of the loch, but not far into my voyage the topography to the west meant the wind began funnelling and it wasn’t long before I had been blown across to the east shore.

The waves seemed to be bigger the further down the lock I got and to keep direction I was paddling 3:1 on the right. Not wanting to fall in on day one I did my best not to end up side on into the waves.

Kneeling meant that all my balance and suspension was being done by my lower back, by the evening I was beginning to get back spasms and was in a lot of pain. I did find a couple of beaches that seemed to belong to hotels and in one instance wandered up to ask if there were any rooms because all I could dream about was a cosy bed, but I was out of luck.

Meanwhile, there was a stunning sunset going on and I was torn between wanting the pain to stop and being so happy and grateful for being there at that moment to see it. I know it’s a view I could have gotten from a layby on the adjacent road, but feeling so isolated as the only person on an unpowered vessel in that whole loch just made it feel magic.

That solitude also let me give myself permission to cry, yelp and moo (don’t know why) every time my back seized up and there were points where I tried to stretch it out but got a wave to the face, so had to reserve that mostly for beaches.

The moment I first caught sight of the next lock was joyous though as it signalled the return to canals and I got an amazing night’s sleep even in my horrible little coffin tent.

The next day was completely different. The canal passed through woodland and had a Scandinavian feel about it. By lunchtime the cloud had burnt off and it was a lovely sunny day. At this point I wished I hadn’t got a wetsuit on as I was getting pretty toasty, but I hadn’t really bought any alternative clothes that I was willing to get wet- preferring to save my PJ’s for night time. On the plus side I didn’t get sunburn either!

Read about the rest of Helen’s trip on Trek and Trade Winds.

Top tips for getting started paddleboading:

1. Give it a go, most kayak places near still water now also hire out paddleboards so you can get a taster or whether it is for you.
2. Build up your confidence, there are sessions and lessons you can go to to improve your technique and make other paddling friends
3. Board selection: my board is inflatable so I can get it in my flat and big enough to hold 2 people so I wasn’t worried about bag weight; but there are some boards designed for surfing and other ways of riding. Decide how you want to ride (maybe do a taster of each type) and ask advice from the other people on the set up which will work for you.
4. Get out there! Stay safe and consider how the weather will effect you. Wind is hard to paddle against because your body acts like a sail and it picks up waves.