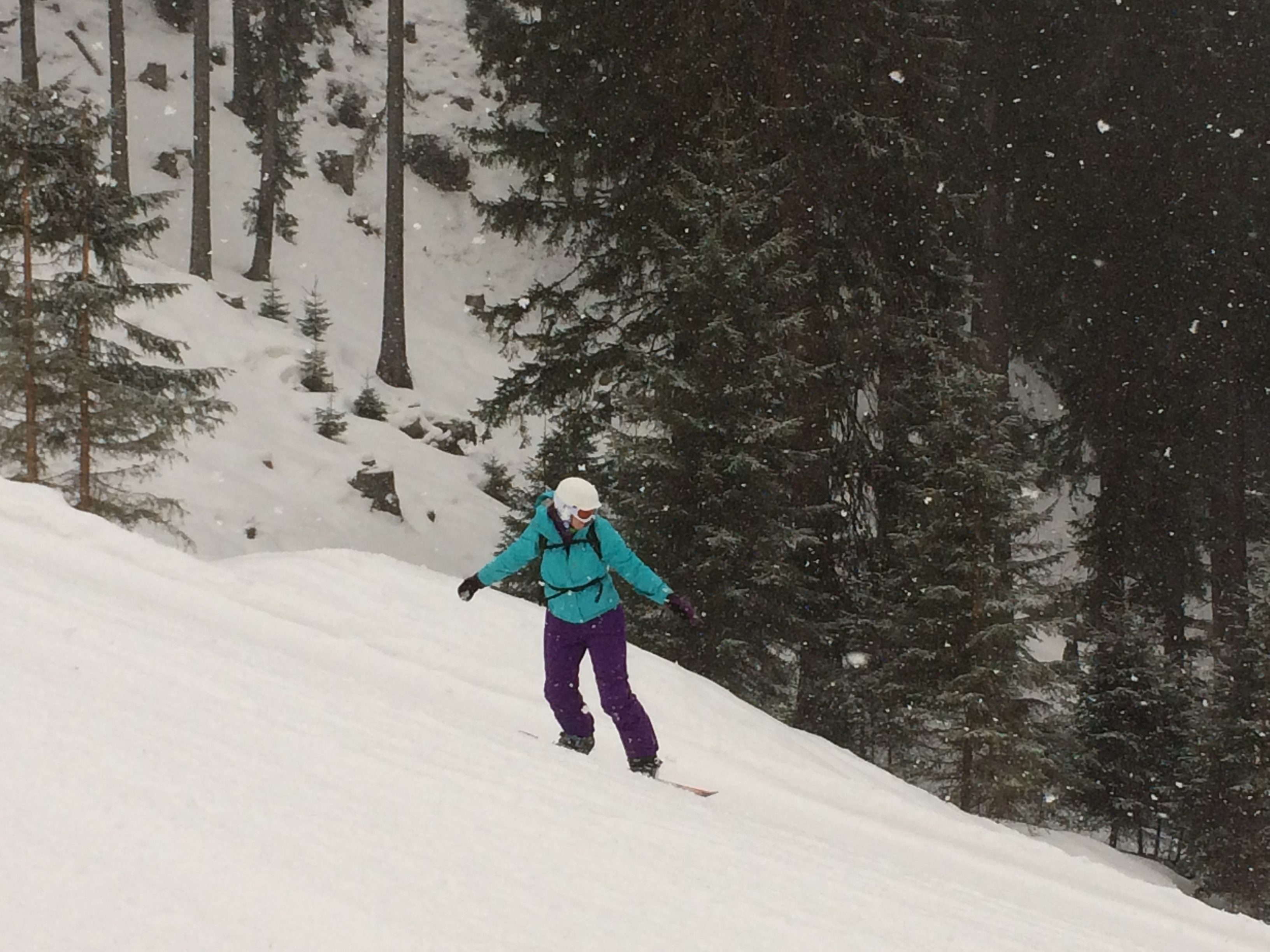 Why travel? To me because, we do not remember days but moments in our lives when the ordinary is eclipsed by extraordinary adventure.

Flying into Innsbruck airport you get to appreciate the skill of pilots. Flanked by high unforgiving peaks we gently glide through the cloud cover towards to run way.

Arriving in Mayrhofen the coach meanders lightly through the skinny Austrian streets dropping weary travellers at their hotels. Finally we arrived at our stop, getting off the bus we follow our rep up a narrow street into what seemed like the back and beyond!

Hotel Alpine Garni Eder is nestled on the outskirts of Mayrhofen looking out onto the National Park on one side and down into the hustle and bustle of Mayrhofen on the other, offering the best of both worlds!

Our welcoming host, Christine can’t get the schnapps open quick enough to toast with her new guests!

Weary from a day of travelling we head to the Wald Cafe (near the ice rink in town) for a delicious three course meal, and yes more schnapps! Well fed and watered we call it a night.

Trekking from our hotel carrying the kit for the day, we make our way to Ahorn lift, as the main Penken lift is overflowing with people by 9.30.

Learning how to walk like a snowboarder gets some getting used to! Its a bit like you have been on a horse for a long time and cant straighten your legs fully. It is also the only time when it is totally acceptable to wear clashing bright colours and of course the baggiest trousers you possibles can, I’m really regretting not packing a belt!

The 150 person capacity lift moves effortlessly up the side of the mountain taking us to the top, arriving into blistering sunshine surrounded by crisp white snow which glints in the suns rays. The runs from here all start in a massive bowl, perfect for beginners. Each run has a great expanse of space and it makes you feel like you can carve around the whole mountain on your own, an amazing feeling!

After a couple of runs we stop at the ice bar for a well earned drink. From here we travel down red 5, to the village its a great run with a little flat road, which catches me out landing hard on my bum, but my impact shorts are doing their job and I’m soon back on my feet.

The Penkenbahn lift which is a hive of activity first thing in the morning has now eased and we walked straight into a gondola to the top. This is one of the longest gondola rides I’ve ever been on. From Mayrhofen which has no snow, we rise over trees and a steep cliff where the snow starts to show its self and I can feel the anticipation growing in my chest.

Mayrhofen is a great place to start snowboarding from, it offers so many options from Ahorn, Penken and over to Hoberg and Rastkogel. There are many runs which can be linked together to make long swooping runs down the mountain.

Linking together reds and blues we eat up the piste.

Martyn and I explored the piste an linked as many runs as we could crossing them off along the way determined to do every run and then journey off-piste if conditions were okay.

My favourite run was Red 1 which led onto Red 11 a mixture of terrains were covered in this run and it was exciting exploring its many features. It started off flat but quickly you arrived at the first downhill which was narrow, but opened up into a large bowl were you could make the most of the space around you on long traverses, it then narrowed again before opening up for the final home run down to the lift where you could really build up speed, such an exhilarating feeling, cutting through the snow.

After the first two days we have completed nearly every red run on Penken and Ahorn and decide tomorrow to head further a field, and check out Eggalm, which I have been pronouncing ‘egglam’! This unfortunately turns out to be my last boarding day as events unfold that no one could of planned for!

Exploration at its finest, by bus and board.

We set off on the Greenline bus nice and early heading to Eggalm two stops from Mayrhofen. The bus stops in Rastkogel and then proceeds to its final destination, the Hintertux Glacier, somewhere we have been told to visit on friday, when the visibility is good. Today the visibility is no good, but as we came all this way it would be rude not too!

As expected the visibility is poor, even at 3250 m. So we plan our route down which links together to make it to the bottom as a group. Red 5, 8, 4 and then 3 to the gondola. As always Martyn leads the way, a good track on his iPod, and he forgets our plan sending him totally in the wrong direction! Ending up on red 11, not to get separated Hayley, Kris and I follow Martyn into the fog on another adventure.

Why I love the mountains.

Making it into the bowl of the glacier the weather clears just enough to show us that behind the mask of fog lay spectacular peaks topped with snow which tumble down to the valley floor. The feeling on the side of the mountain of total isolation but also being totally connected to nature is what keeps me coming back for more. Up here in the grips of the outdoors is where I feel most alive, its the balance between being on top of the world but so insignificant compared to the might of the mountain at the same time. Its a feeling only found from outdoor adventure and one I live for.

The journey continues, in search of good weather!

Back on the bus our new plan is to head to Rastkogel get the lift up and use red 1 to board down into Eggalm in order to complete this peak.

The start of this run was an easy blue linking onto a red route which snaked through the trees into the village. I have never been great on flat roads. I spent my first season in Soll walking a lot of them!

This year my confidence has grown, along with my skill, however, as I found out on one icy corner not as much as I thought. Coming down on my toe edged I went to switch to heel as the board went flat and gained speed I over compensated digging in my heel edge hit some ice and landed with all my weight on my left elbow.

There are times in life when you feel like crying, but crying gets you no where. On the side of the mountain you just have to keep moving.

I instantly new this was not just another knock, my arm popped and felt very painful. Luckily Martyn was sitting close by and came to move me out of the way of many skiers racing by. After a moment unable to board I got up and walked to the clearing where Hayley and Kris sat. My arm felt so bizarre, like it wasn’t attached to my body and I was sure it was dislocated. Having never dislocated or broken a bone before I was reassured by Martyn’s comments of “you probably just knocked it badly” after discussing with Martyn that no I could not ‘skate’ down on my board we started walking and Kris and Hayley went on to see if they could find help.

We walked for what seemed like an age before we got to a bar on the corner of the run I sat down feeling rather queezy. Martyn spoke to the bar manager in his best Austrian to call a taxi whilst Hayley helped me with the pain, a shot of schnapps and two paracetamol!

The taxi ride off the mountain was long and winding every pot hole made me feel like my arm was being ripped further away from my body.

We reached a small hospital in Lanersbach relieved to be out of the taxi. The next few hours were a blur. I went into a small room where a lovely nurse gave me Tramadol before several X-rays. I then was put to sleep, with a dislocated and cracked elbow. Good night world.

Waking up with a bump.

Waking up to bright lights and people speaking Austrian, was all together bizzare, like waking up inside a dream and not quite knowing whats real. I was soon reminded of what had just happened which brought me back to Earth with a thud.

The next day was arduous after spending a considerable amount of time in a doctors waiting room my 15 minute appointment cost 70 Euros! After saying good bye to Martyn at the lift the consequences of some silly fall felt very real.

Friday was a better day Martyn treated me to a steak Thursday evening (which he had to cut for me as I couldn’t use my hand) and today was a glorious sunny day, one which I was determined to enjoy as we travelled back to the Hintertux glacier where the day had began when I had my accident.

Today is one of those days where if you let them your emotions take over and the fact your holiday is ruined (as well as the start of you mountain bike racing season, but lets not mention that right now) may turn you into a stormy dark cloud.

Not today though, I released that inner child we all have kicking about who said, “Oi why not build a snow man and chill out!“ You know what, that was a great plan. I stood and admired the shear beauty of my surroundings watching people take there first turn on skis and board down the glacier watching the magic of the snow as it allowed safe passage down the mountain to the young and the old.

My snowman may have had no eyes but he was the coolest snowman at 3250m on that Friday. Heading back down to Martyn we had our last mountainside lunch of curried sausage and fries before I sat and took pictures of Martyn playing off piste.

Although I was gutted to not be able to follow and play around off-piste the time sitting in the snow was well spent on reflection of how you never know whats round the corner. You never know when you might catch the wrong edge and this is why I feel its so important to live the life you dream of, if the doors you want to walk through aren’t open, go find the key.