Sunday was the last day of this amazing adventure, the Carpathian MTB Epic, it has been a mental and physical roller coaster from day one.

Lining up at the start line on Sunday I felt a twinge of sadness that this incredible experience was nearly over but also a little relieved that this would be the last day of pain! The final day saw competitors in the 1-day-epic join us at the start line for a shorter 40km loop, this was an appealing idea, just 40km instead of 60km…

For the first time in the race we headed out of the arena and into new territory battling a grassy off camber field with ruts and diverts the size of my front wheel it was tricky to navigate after this exhausting affair we were greeted with a hike-a-bike section, I won’t miss these, at the top I had a decision to make 40km or 60km. It wasn’t hard really it had to be 60km! 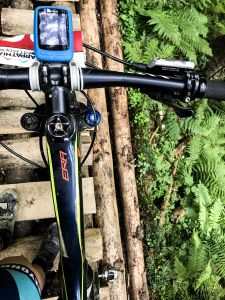 The trail continued down on a fast descent, but line choice was important as huge gullies had opened up leaving a thin ‘safe zone’ on which to ride.

I felt really fresh and continued to make good progress. The course was amazing with so much packed into 60km riding through lush green forests, over tiny bridges and vast ravines with the sound of the water echoing.

Once we climbed out of the ravine the descent down was really tricky almost like riding in a river bed of boulders, it was a case of eyes up bum back try to stay straight, my arms were getting a serious workout as I rumbled through the rocks.

At the bottom was every riders nightmare, the air ambulance, I’m not sure what had happened but I do hope whoever the rider was he is okay.

After this I rode slightly more carefully these rugged mountains we were playing in meant business and the consequences for choosing the wrong line could be nasty. The course continued to climb until reaching the steepest downhill I’ve ever come across, channelling my inner Rachel Atherton I rode the first 20m before grabbing a tree in order to stop. Walking my bike was as hard as riding, to keep it going slow enough for me to slide my feet forwards the breaks had to be locked out which made the bike skid sideways.

After battling gravity through the wood the bottom was in sight and the course started to climb, again. 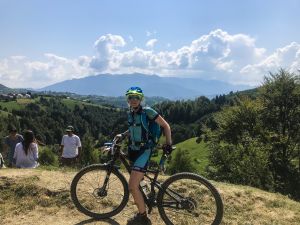 My nutrition strategy was working every 40 minutes EAT. This worked well and I pushed myself hard until the end was in sight. The last 5km were tough following the same course as stage two it felt a really long way, but finally the white arch was in view and I just had one more climb to make and then it would be the home straight.

Rolling over the finish line was an awesome feeling the Carpathian MTB Epic stage race had held nothing back, a massive adventure which pushed my mountain bike skills to the max and challenged what I thought my body was capable of. Turns out it was more capable than I thought! 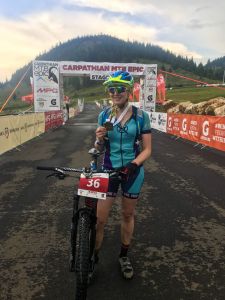 Coming into the race I was not prepared, training had been mediocre at best and a mixture of family and friend events had not exactly made me ‘super healthy’ either. What I learnt was that your body is incredibly adaptable and you just learn to suck it up, smile and keep pushing those pedals and eventually that climb will finish.