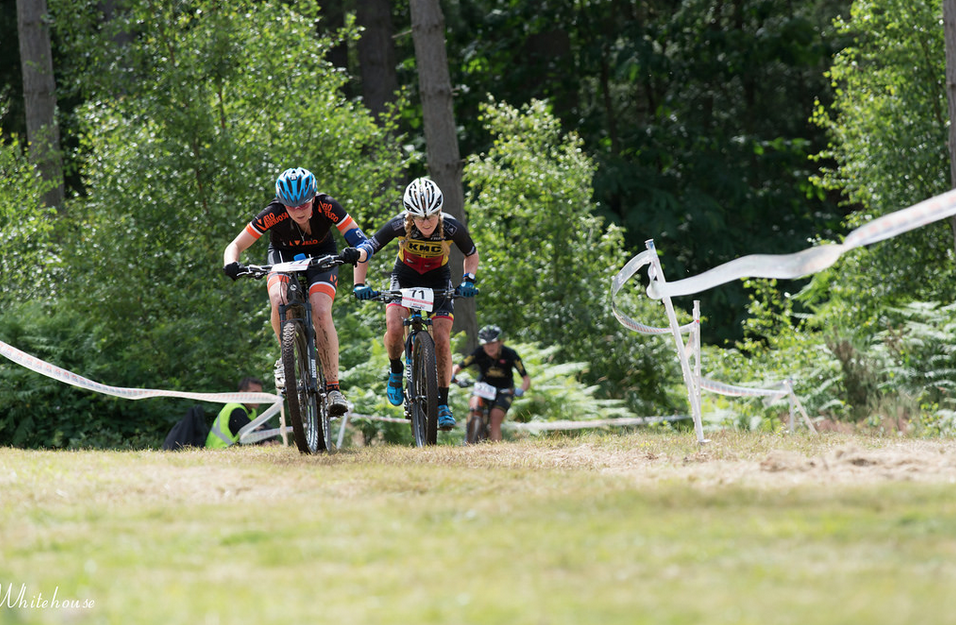 On Saturday I travelled with Jenny from Mountain Tracks to round four of the National series at Sherwood Pines in Nottingham.

During the day Saturday I ran a cycling event at Surrey Sports Park which incorporated mountain bike coaching, GoRide races and an event village, this was a brilliant event but not the best race preparation as it meant Jenny and I arrived in Nottingham very late.

After putting the tent up it wasn’t long before I was asleep only to be rudely woken up by the torrential rain!

The morning brought cloud but at least it wasn’t raining. We went out and practised the course, it was a good course with lots of twisty singletrack sections through the forest linked by cart track and open fields, feeling happy about swapping my wide handle bar for something a little narrower I felt confident in the trees working the bike around the corners.

There was only one technical section, a log which you had to drop off onto an off camber log with a drop off the end, we didn’t get to ride this at practise but from looking at it looked manageable.

The course was quite short and was going to be a fast paced race. I knew I needed to have a good warm up so started warming up early.

It wasn’t long before gridding started and we charged off I got into the front couple of riders for a while, I felt good so pushed on trying to stick with the group, as we came out of the single track and onto the cart track I was over taken by a couple of riders, Jenny included and tried to stick with them, I managed to do this until the end of the first lap when we entered the arena but the grass field portion of the course seems to sap energy out of my legs and I had to slow to take a gel, the technical section went well dropping off the logs happily which spurred me into my second lap.

Frustratingly nearing the end of my third lap my legs felt tired and with two laps to go I dropped off the pace to try and recover, but the damage was already done. Jemima and I kept swapping positions me leading through the singletrack and her powering past me on the cart tracks only for me to catch her again in the singletrack and over take.

In my fourth lap I picked the pace up again and was planning to get ahead of Jemima and stay ahead this time! Sadly that didn’t happen after I had to stop on the technical feature to let the lead elite girls through, however I think getting pushed off the course for a Olympian to go through is not so bad!

However this meant I had lost Jemima and didn’t have the energy to catch her up. I finished feeling totally exhausted I had given everything I could but it hadn’t been enough today, I made some mistakes that cost me time and will be able to take this into my next race and learn from those.

My average heart rate was 176 and my max was 185, I worked hard but need to work on my oxygen efficiency which means working at lower intensities for longer periods of time.

I came 11th overall 13 minutes behind Hollie Bettles who won the race. It took me 1 hour 45 mins to finish the 17 miles.

I need to work on my pacing and stamina and plan to do this over the coming months.