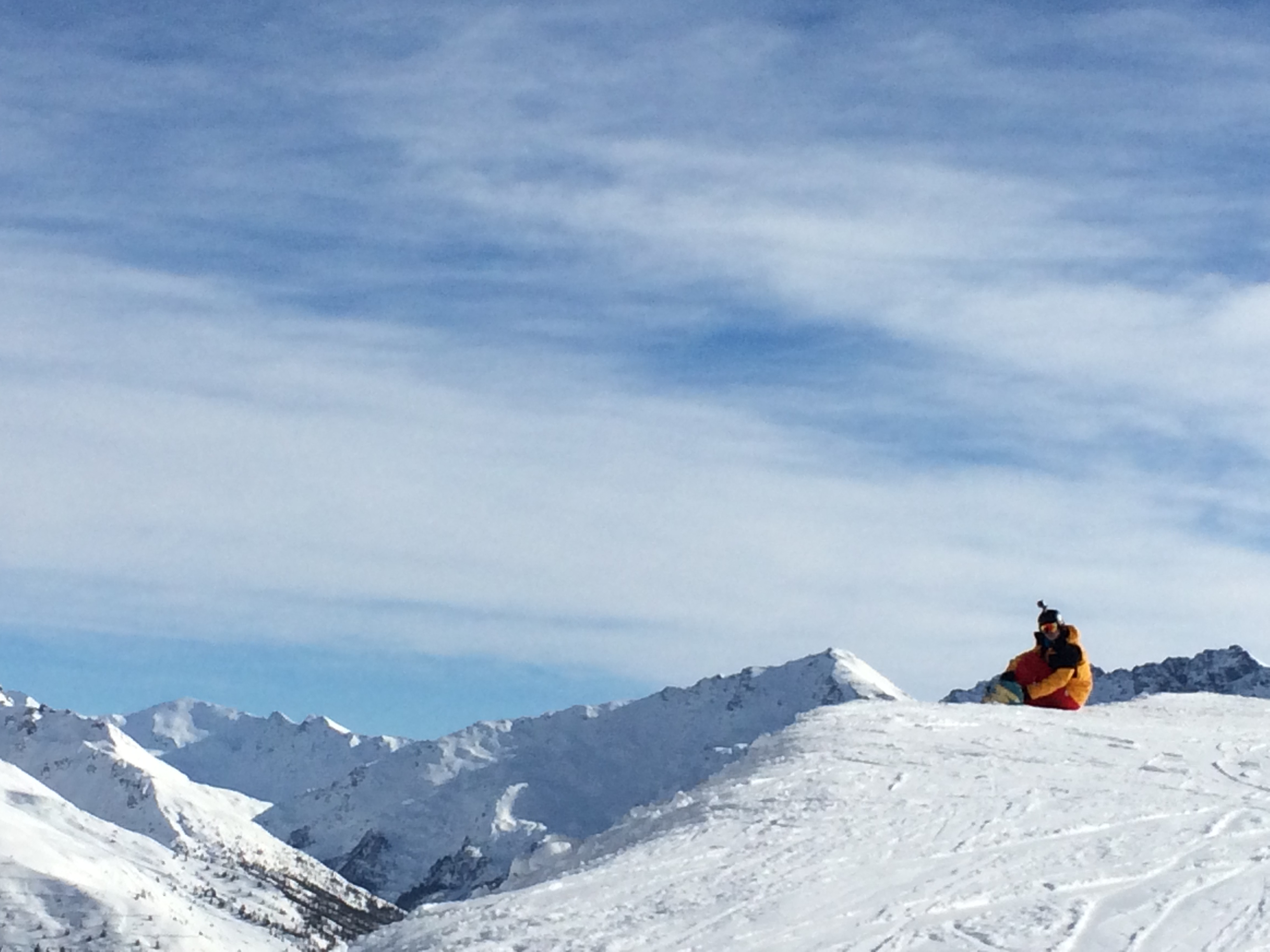 After what seemed like the longest journey ever, we touched down in Borgata outside the Banchetta hotel, weary from a day spent in Gatwick having missed our flight due to a communication blunder by our travel company.

We were delighted to have not missed dinner and tucked into hot soup and bread before getting an early night ready for our first day on the slopes.

We woke early with excitement ready for the day ahead. From our hotel we could walk to the lift and had planned to check out the piste in Sestriere before planning the two weeks boarding ahead of us.

Martyn is a very confident snowboarder and was buzzing to get to the highest point and see how quickly he could make it to the bottom. After dislocating my arm last year I was a bit apprehensive and nervous, I had however brought elbow pads to help give me a confidence boost!

Having not been on my board since hurting my arm, the butterflies continued to rise and intensify  closer to the top of the chair lift. Deposited at the top of the slope I eagerly strapped in my feet and edged close to the edge of the slope, I gingerly started my descent getting into the rhythm of toe edge, flat, heel edge, flat. I crept down the slope watching others, including Martyn, hurtle past at a lightning speed.

At the bottom I breathed a sigh of relief at getting down my first run, and by the end of the first day I was back in the swing of things.

The sun rose brightly on Monday and we headed over to the gondola to go to the other side of the mountain into Sauze d’oulx. As we reached the top the view was incredible, stretching in every direction were white peaks set against a beautiful blue sky. The beauty and exposure when you’re standing on top of a mountain is breath taking, there is no feeling quite like it.

Heading down the slope I encountered my first flat bit of road, the same type of surface where I hurt my arm. A feeling of dread resurfaced which I tried to push to the back of my mind and focused on my turns, but found myself skating down on one edge which sent burning sensations down my hamstrings. Tired from my mini panic and extra adrenalin I was relieved to stop for a hot chocolate! The rest of the day went smoothly and I soon learnt to relax on the roads looking ahead instead of at the drops off the side when they became narrow.

The next morning the fog had rolled in and the sky was releasing a soft flowing stream of snow. For the next three days the snow was relentless, a never ending flurry of white stuff. It was a surreal feeling to take a chair lift up through the snow covered trees and see the deep snow drifts.

Snowboarding in the fog is a bizzar experience, when you can’t see more than 5 metres in front of you and the sky and ground both appear in a white haze. It makes differentiating lumps and bumps almost impossible. At this point you realise how reliant you are on sight as a sense and that without it you feel very lost. This is when you have to tell yourself to relax, if you stiffen up every bump lands you on your bum! Relaxing and letting the board move beneath me I soon got into the flow of things and started to enjoy my white out experience. Everything is so still and you can hear so much more it’s like your ears become hyper sensitive to the sound of the crunchy piste or cracks of ice and the sound of others around you.

When the skies cleared and the sun came out to play the scenery was remarkable. Everything was coated in a white vale and we immediately went off –piste to enjoy the newly fallen snow. I followed Martyn straight off the side of a run and ran straight into waist deep snow! However hard I tried I didn’t seem to be able to dig my way out, so ended up taking my board off my feet, digging it out and walked to a clearing.

Once the piste bashers had groomed the slopes I felt a weird sense of un-easiness as I could now see how steep the slopes were and every lump I had in my path ahead. It was funny to think when the visibility had been awful I had completely trusted my skill level and felt my own way down the slopes, but now my eyes were looking down I wasn’t convinced I could do runs that I had done when I hadn’t been able to see anything!

After another few days of more snow falling and lots of great days boarding we felt like a change of pace and mode of transport so Martyn and I booked a trip of Husky dog sledding.  I was expecting this to be a fun and less tiring activity, how wrong I was! My team of three Huskys Jack, Annie and Toffee were eager to pull the sled as we set off on our mini adventure. They  worked well and listened to my commands of ‘Okay!’ meaning Go, ‘Woah’ meaning stop and ‘Easy’ meaning, well take it easy! However whenever the slope turned uphill they found a new game to play, this was called “role in the snow and sit down and let Hannah do all the hard work pushing the sled” I suppose they felt that after pulling me down the hill it was only fair I did some of the work. Despite it being not the rest day we had anticipated it was great fund and a brilliant experience and one I would recommend!

That afternoon it was back to boarding and Martyn, who was teaching himself to ride switch and 360 taught me to 180 something I am still working on!

The Milky Way ski area which is vast and covers 400 kilometres and straddles the Italian-French border.

The resorts are staggered at very different altitudes, from Cesana at 1350m to Sestriere at 2035m meters. Sestriere is the highest resort in the Milky Way with some of the most difficult terrain, we spent a lot of time here and Sauze d’oulx where the runs were longer than in Sestriere and had a flowing feel to them which we both enjoyed.

We spent our last day in Montegenvre (1850m) over the border in France the runs here were steep and small but the scenery was beautiful and it was great fun weaving across the mountains through Italy and France for the day.

Two weeks in the snow covered mountains was awesome. I had pushed myself outside my comfort zone when the going got tough. I felt like a tiny ant in a very big world standing at 2035m, I felt exhilarated and a little scared on my first black run when it seemed like I was free falling through the air, but it all added to the satisfaction and self fulfilment of snowboarding.

There is something special about being in the mountains which makes you feel more alive. They are a place of beauty and adventure a place where you can feel free and live life to the full.