Putting in the miles 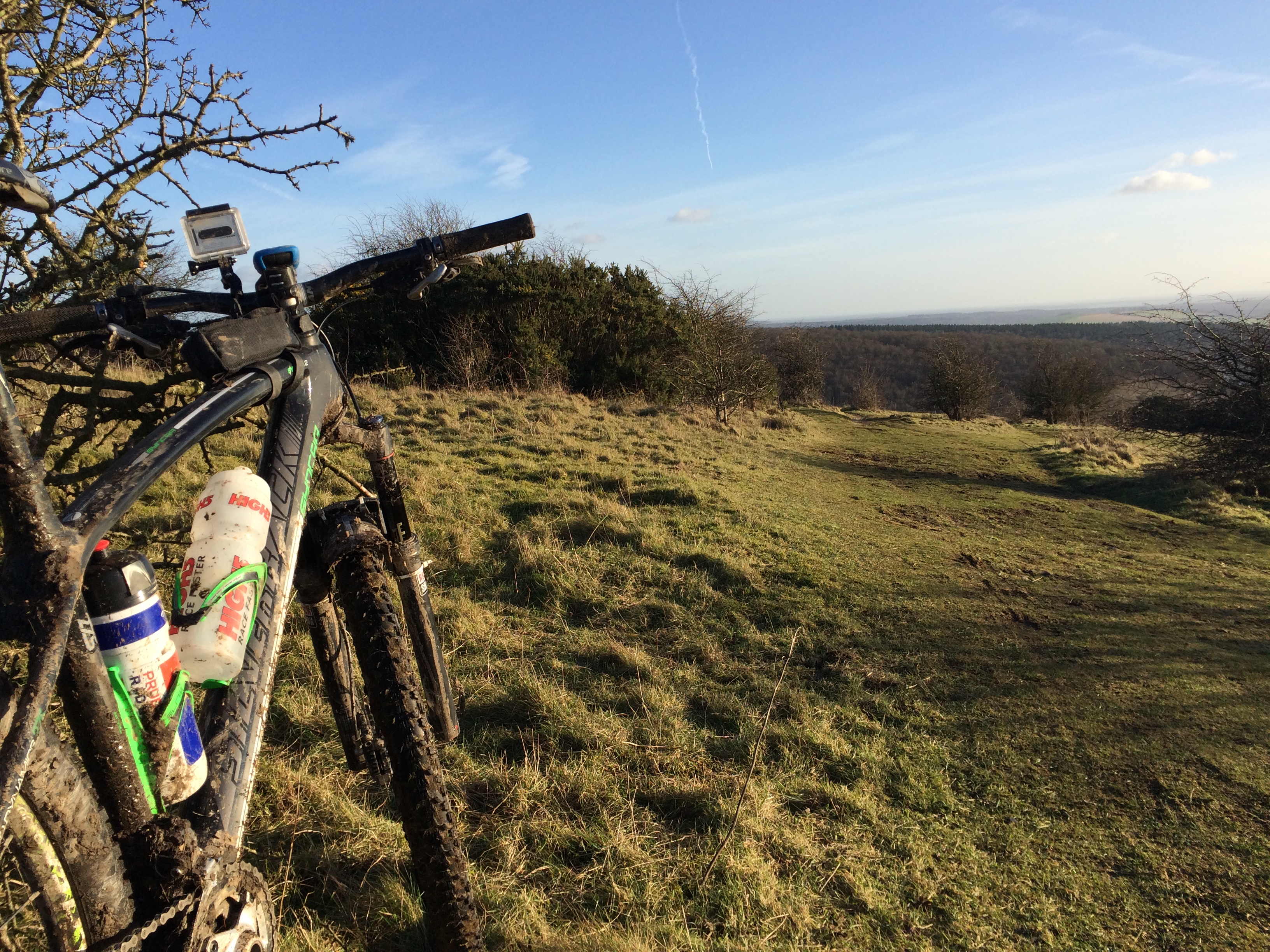 Over the weekend I went on two long endurance rides, on Saturday I had planned a long four hour off road ride along the South Downs Way (SDW). The ride started well working my way through QE Park which is one of my favourite places to train. I crossed the a3 and continued up Butser Hill which is a hard climb on and off road. The view from the top was spectacular across the Meon Valley.

I then followed the SDW along towards Old Winchester Hill, the weather was brilliant but days of rain made it sticky going, when I reached the top of Old Winchester Hill a walker said I wouldn’t go down there it’s very muddy I doubt you will be able to break! I thanked the man and thought how bad can it be!

It turned out breaking was the least of my problems! The cloying mud stuck to my tyres like glue until there was such a thick layer my wheels wouldn’t turn! A new game presented itself, how much mud can I allow to clog up my wheel before I have to find a good stick to pull it all off. Progress was painfully slow and all I kept thinking about was getting to the road. I could hear a road ahead but on asking walkers found out it was around 3 miles to Exton and the escape from the mud! I continued for a while push, get stuck, pull all the mud off. By this time my over-shoes kept coming off my toes because to the build-up of mud and my feet were soaked. Thinking of the positives I was out in the fresh air in the sun what better way to spend a Saturday. I soon met a mountain biker coming in the opposite direction his destination was QE Park, where I had come from all those hours ago! By now I had been riding for 3 hours and riding and walking for around 10 minutes. He said it would be worth carrying my bike the rest of the way, which I decided to do and although my beautiful carbon Silverback is usually as light as a feather today, clogged with mud and unrecognisable it was far from it!

Carrying went okay but in bike shoes with very little grip it was slow going through the group.

I finally made a rideable bridleway and headed towards to sound of the road slowly but surely I made it!

By this time I had been going for nearly four hours had very little water left and had only one decent snack left so I had an energy gel, something I would usually only have in a race. It gave me a little boost which got me to my destination of Corhampton to look at a house Martyn and I are interested in. I then turned round and rode back where I had come from up through a pretty village called Warnford, turning right back towards Old Winchester Hill the climb was slow and with little energy every pedal stroke was tough. I finally made it to the top and decided to follow the road as far as I could to miss out any more climbing! I met my outgoing path in a small village and re-joined the SDW. I was relieved to be going down instead of up Butser Hill, I rode slowly passed people and then let my brakes off and let the bike go it was exhilarating the speed and feeling of freedom as I made very quick work of the hill that took a good 10 minutes to climb!

I crossed the A3 and made my way up the blue section of QE Park towards Buriton and home.

Sunday was a new challenge, a three hour tempo ride these are designed to increase my aerobic capacity and my vo2 max, to do this you have to work in a heart rate zone mine is between 148 – 158. I set out spinning to warm up, my legs were a little tired but generally good, I felt in good form as I made my way out of Petersfield towards South Harting. I had a new nutrition plan, to eat a jelly baby or two every 25 mins this worked well for the first hour and a half I felt good and was able to keep pushing a good pace.

About 20 minutes later I hit the proverbial brick wall, after battling with my legs telling me to slow down and my head telling me to stop I turned for home. I reached into my bag and pulled out my last ration, a USN protein and energy bar, these are great and worked well on Ride London, the problem was I was already too fatigued to recover so instead gritted my teeth and pushed on, every pedal stroke seemed like hard work, but slowly and steadily I won the battle and turned my final corner towards home.

Part of my lack of energy was potentially the after burn from Saturdays ride and depleted glycogen in my muscles which I hadn’t managed to completely replace on Saturday before my Sunday ride. This is a factor to think about and plan for in the future.

Sometime you have to listen to your body and know when to call it a day. Looking at the bigger picture if you’re too wiped out to then train for a couple of days, then you’re actually not progressing in your training. Being a time crunched athlete fitting in a job and business I am aware my recovery and training time is a delicate balance between too much and too little.

Our bodies adapt and improve when we are at rest, being a bit of a training nut it’s important to remember that while you might feel great and strong when your lungs are bursting and your racing up hill, that your body actually adapts to this strain when you’re sitting at work or on the sofa.

So for all those just one more mile and then I’ll go home people out there, have a look at your training and recovery load and take a check on how your fitness is changing.